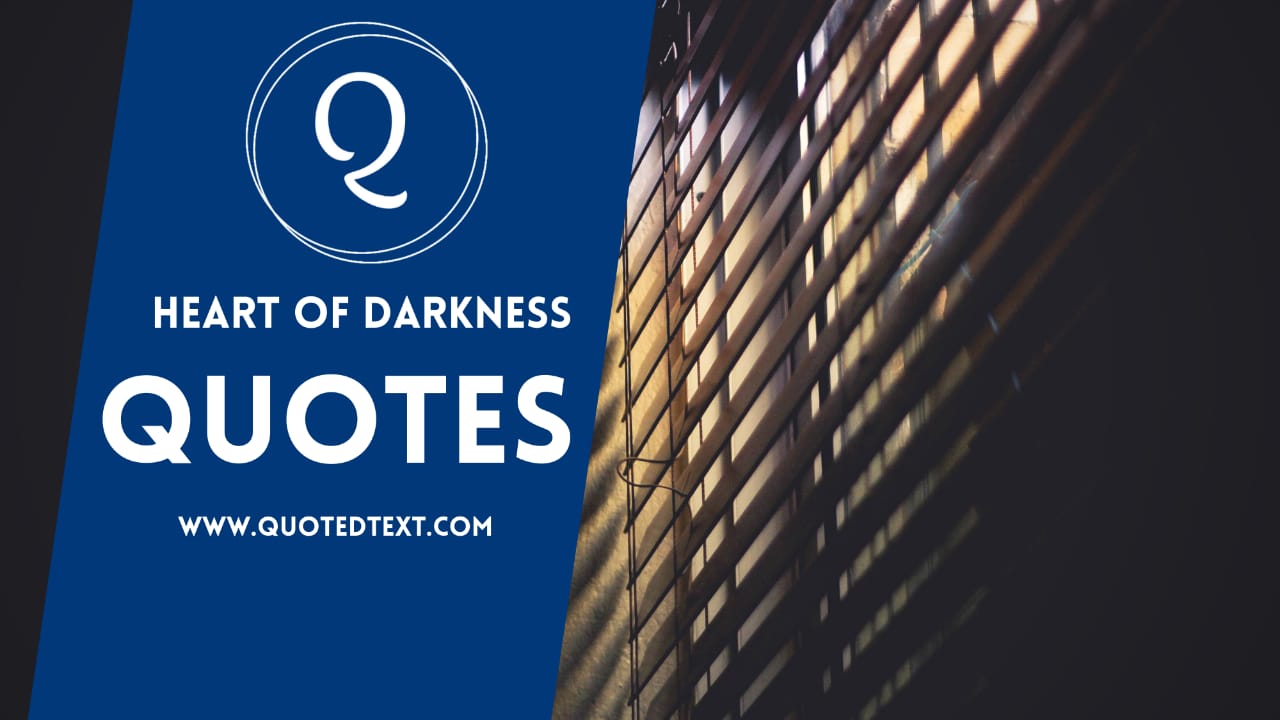 Heart Of Darkness is a Classic English Novella written by Joseph Conrad and published in 1899. This tremendous and terrific novella roams around the story of two of its very prominent characters,’Marlow’ who’s an English person and the very narrator to the story and,’Kurtz,’ who’s a German person. Before readers even consider understanding furthermore about the storyline, they should first realize that Heart of Darkness is a character-based novella, so the writer has engrossed more on the characters over the plot.

The storyline starts with The Thames River Bridge, London, where Marlow was hanging out with his friends and spent the whole night over the bridge. He recites them an old tale of him from his young age when he went on a trip to Belgium Congo as a riverboat pilot. It was his wish to travel to an African country via a boat trip, which Marlow got a chance to go on once a well-connected aunt of his offered him a job in a European Trading Company as a Steamboat Pilot. This company was a very well-renowned exporter of ivory. So Marlow took the offer and travelled to Belgium Congo. On his way, he saw a French-Warship, which attacked the jungle with ample ammunition due to some revolt with the people who lived there.

Marlow went further on his journey, and as soon as First Company Station arrived, Marlow observed that native black people were forcefully being turned to slaves. He approached the company’s chief accountant and talked about this slavery they were doing, in which a name came up, Kurtz, who regulated his station deep within the jungle. He wanted to meet him, but since his steamboat stopped working due to an accident and repairing would take about three months, all he could do was wait. While waiting for his boat to get fixed, he realized how respectable and remarkable person Kurtz was. Some praised him, but some had envy for him because they believed he alone could work hard as ten men. Time passed, and now that the ship was fixed, he re-accumulated his urge to meet the conspirational character, Kurtz.

Natives attacked them and tried to stop him and his team, but an African Helmsman got sacrificed within the struggle. Soon enough, Marlow and his crew arrived at the central station, where they met a Russian Trader. He told them Kurtz was alive but too sick. Marlow’s team took Kurtz out of the central station on a stretcher. After looking at the situation, native people and a lady who seemed to be Kurtz’s mistress started a riot against them. Kurtz silenced them, and they backed off. Marlow settles up a pep-talk with Kurtz and tries to understand him because, as he described, his face looked like he wanted to say something. Kurtz told him he was waiting for his last breath, and soon enough, he died. His last words were,’The Horror!! The Horror!!’.

Before his death, he handed over some documents to Marlow, which he secretly took with him. After some time, Kurtz’s relatives came to meet Marlow, where he gave Kurtz’s papers and met his mistress. She asked him Kurtz’s last words, and rather than telling the truth, he told her he took her name before dying, which made her cry even more, and the story he was reciting his friends came to an end. He stayed silent for some seconds, but his friends broke the silence by praising the story, and that’s how this novella ended.

Marlow was very enthusiastic and adventurous by nature. He loved exploring new places and had dreams of travelling to Mid-African countries, which he made come true. Marlow had a profound and severe approach to life. Indeed, he could be a little stubborn at times, but this usually became the reason behind his success in his job and on his sea voyage.

Kurtz was a very empathetic and kind personality. He loved doing what he did and always worked hard to get to the top. Everyone always praised him based on his skills and compassionate nature. Besides all the things he ever achieved, he was not selfish at all. But as they say, when you grow in life, some love you, get inspired from you while a group of haters also appears out of nowhere. So was the Kurtz case. Because of his skills in collecting ivory, some workers had a sense of envy towards him. But as we said, he was a lovely person, so he used to ignore them and work just his way. 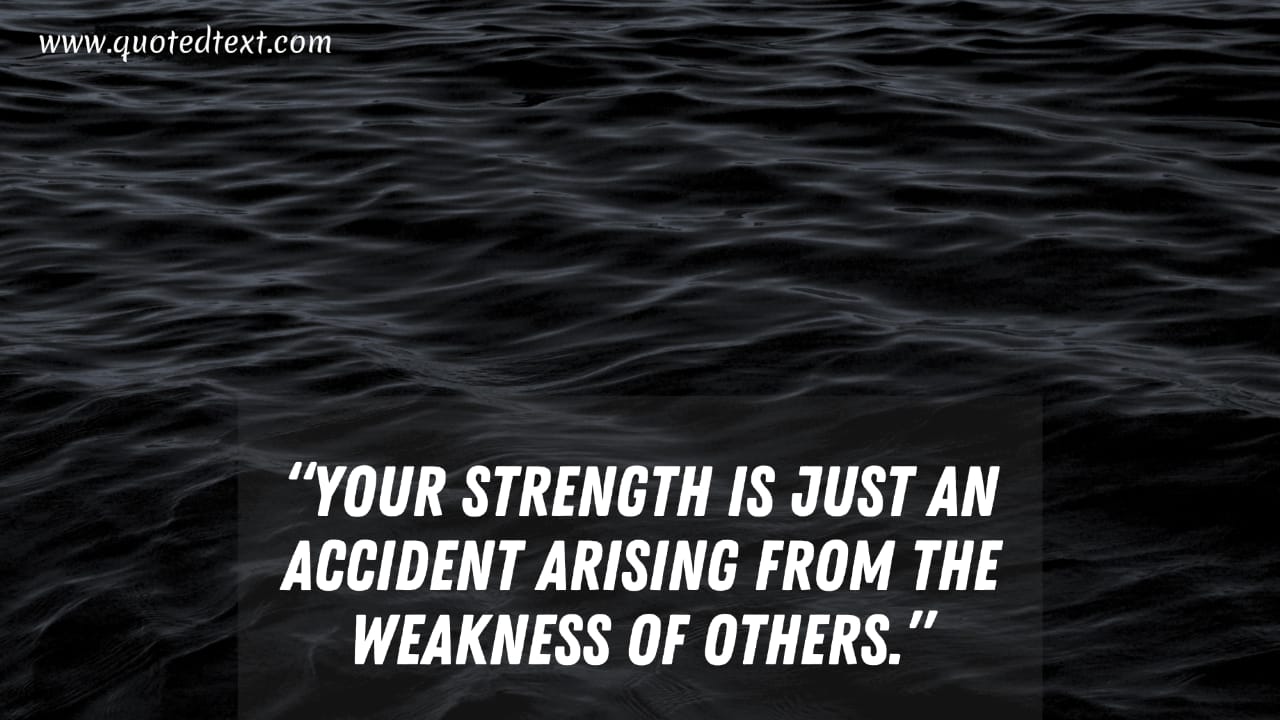 “Your strength is just an accident arising from the weakness of others.”” 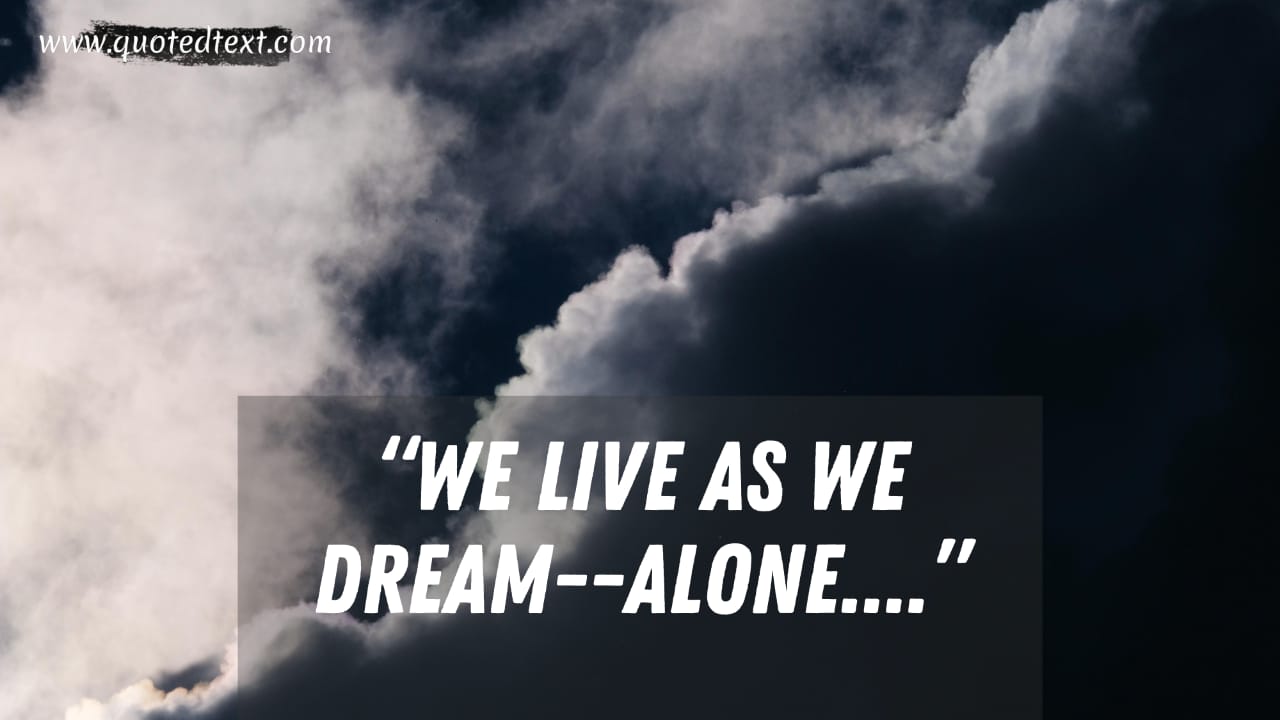 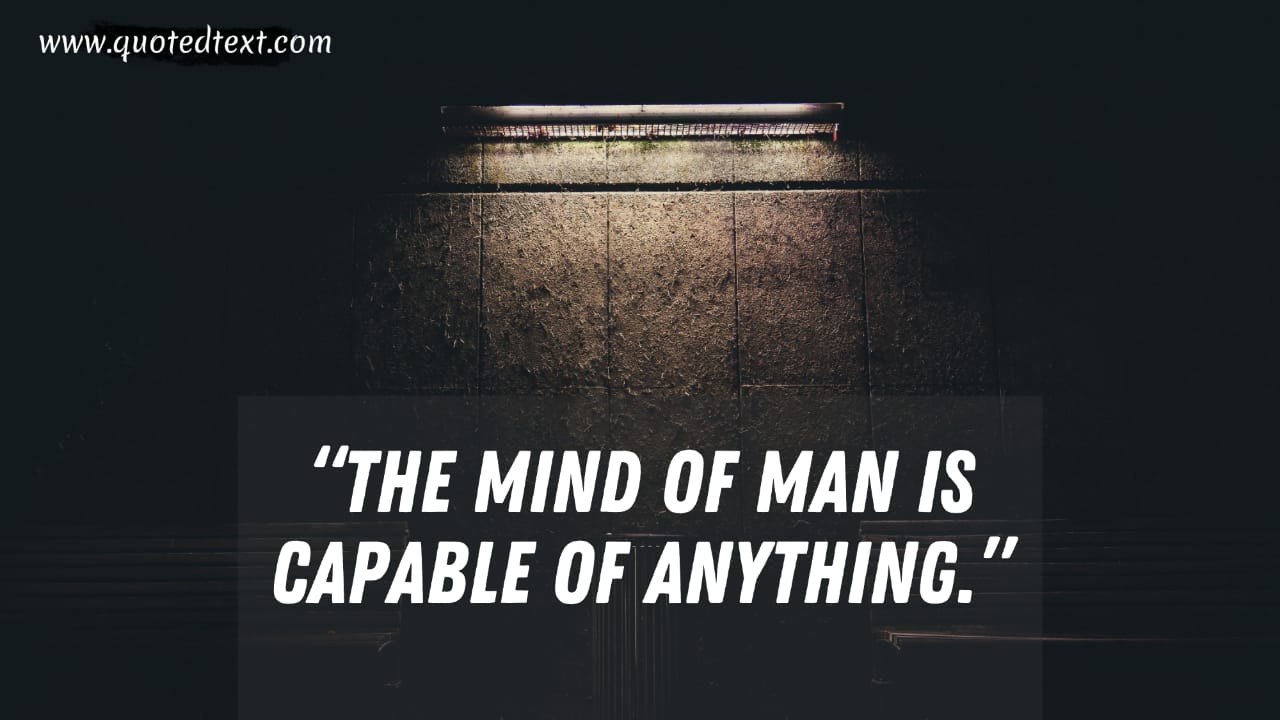 “The mind of man is capable of anything.” 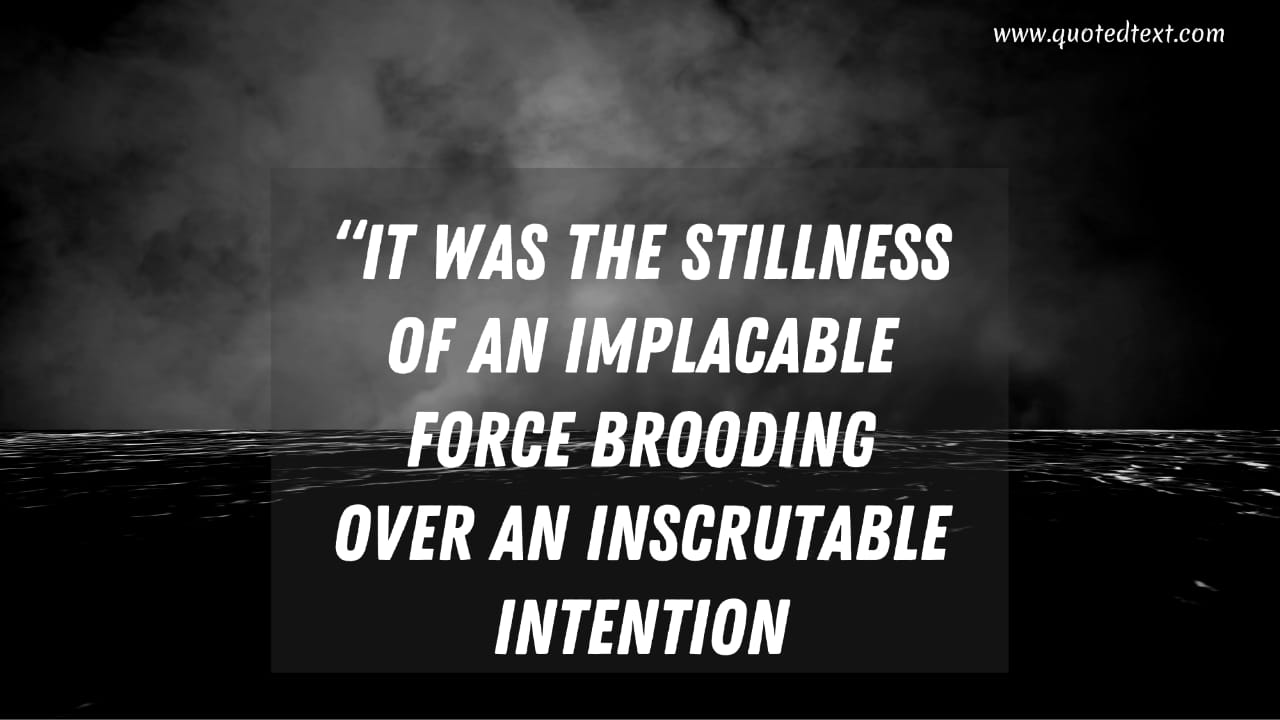 “It was the stillness of an implacable force brooding over an inscrutable intention. ” 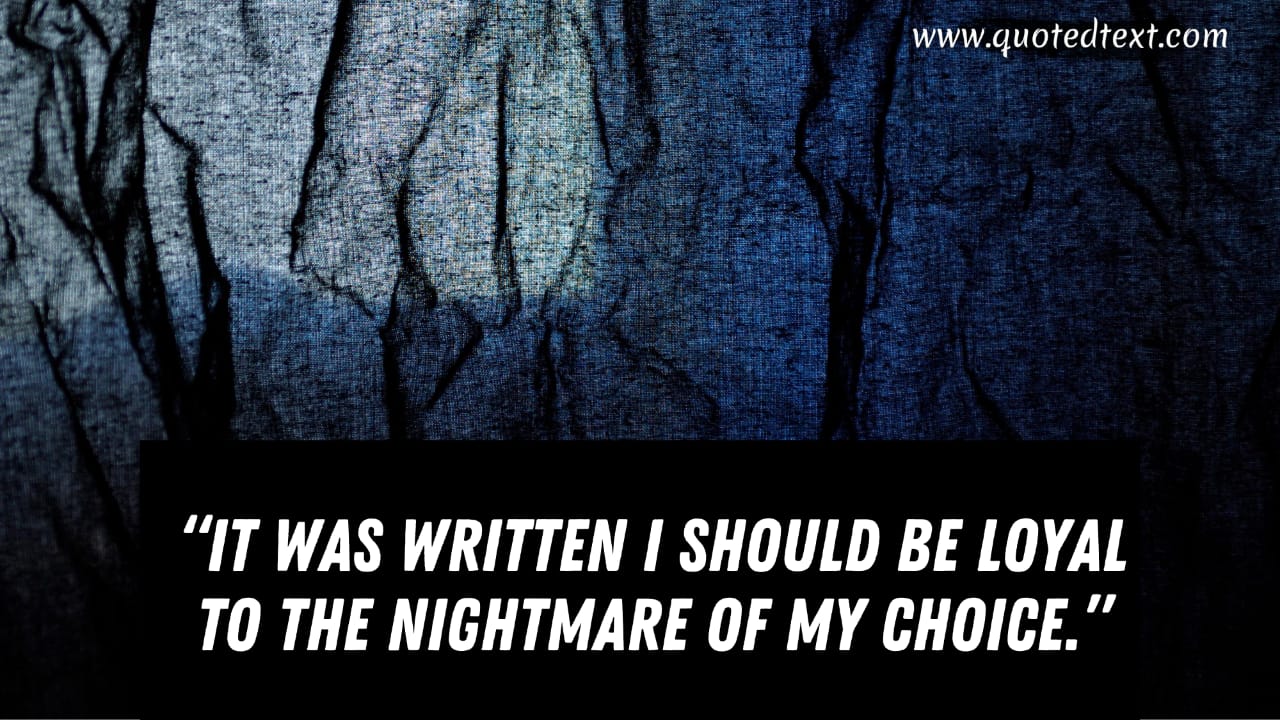 “It was written I should be loyal to the nightmare of my choice.” 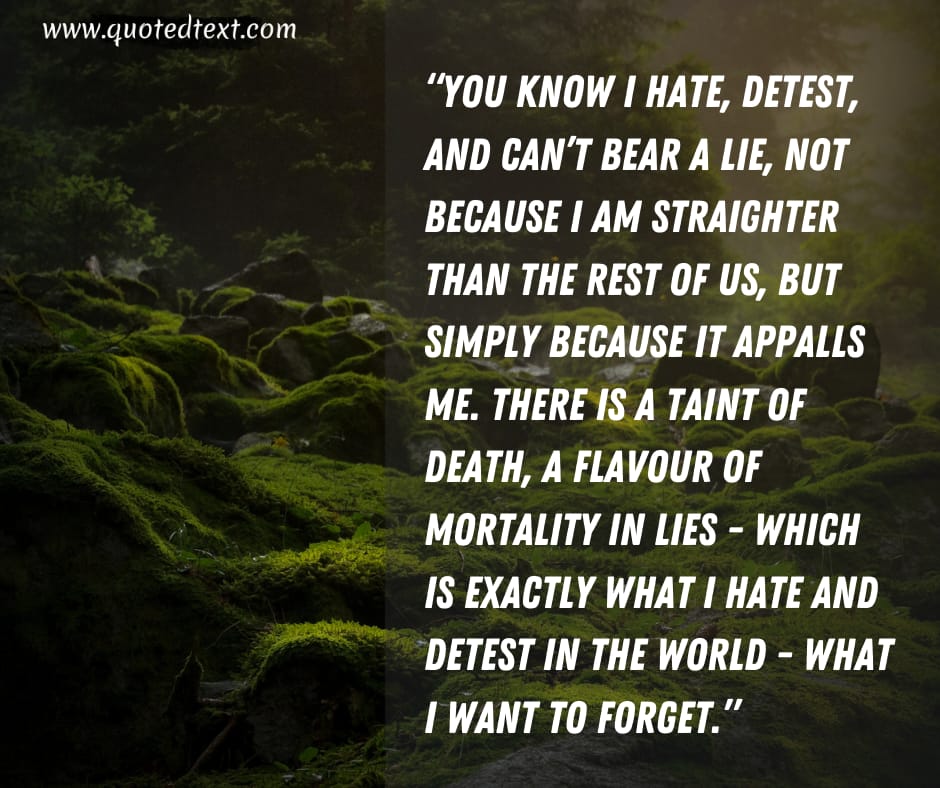 “You know I hate, detest, and can’t bear a lie, not because I am straighter than the rest of us, but simply because it appalls me. There is a taint of death, a flavour of mortality in lies – which is exactly what I hate and detest in the world – what I want to forget.” 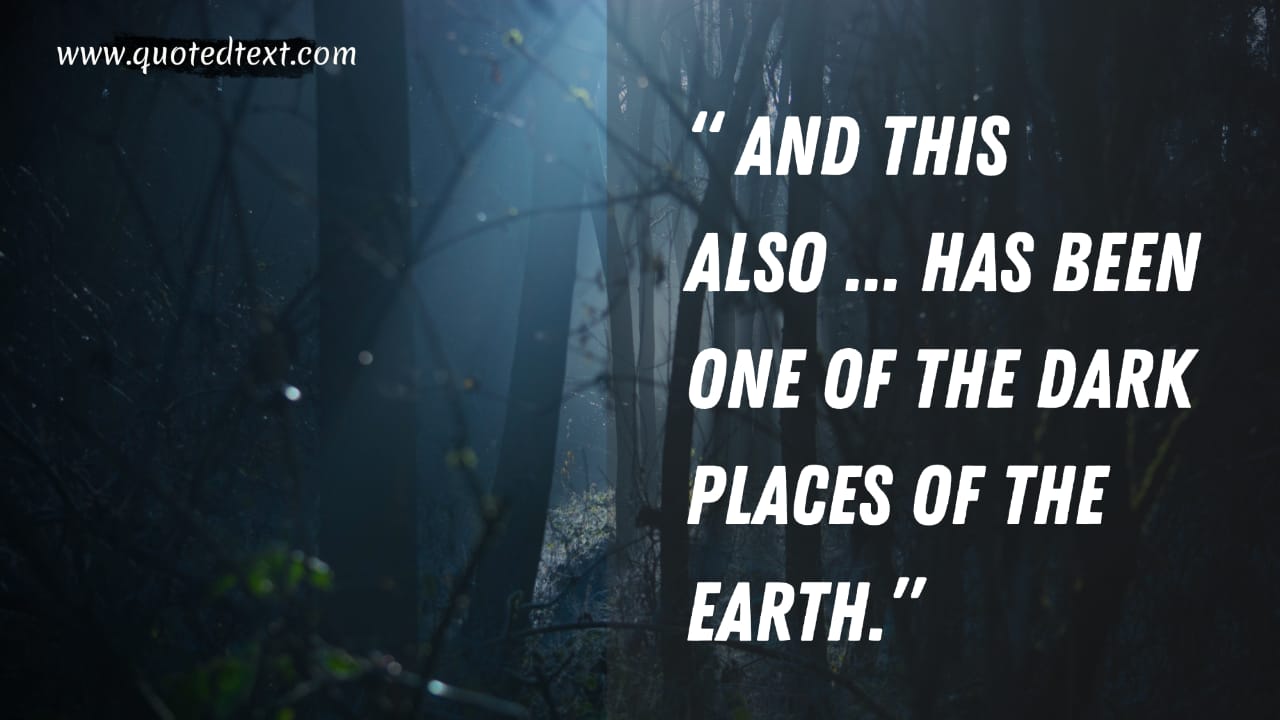 “And this also … has been one of the dark places of the earth.” 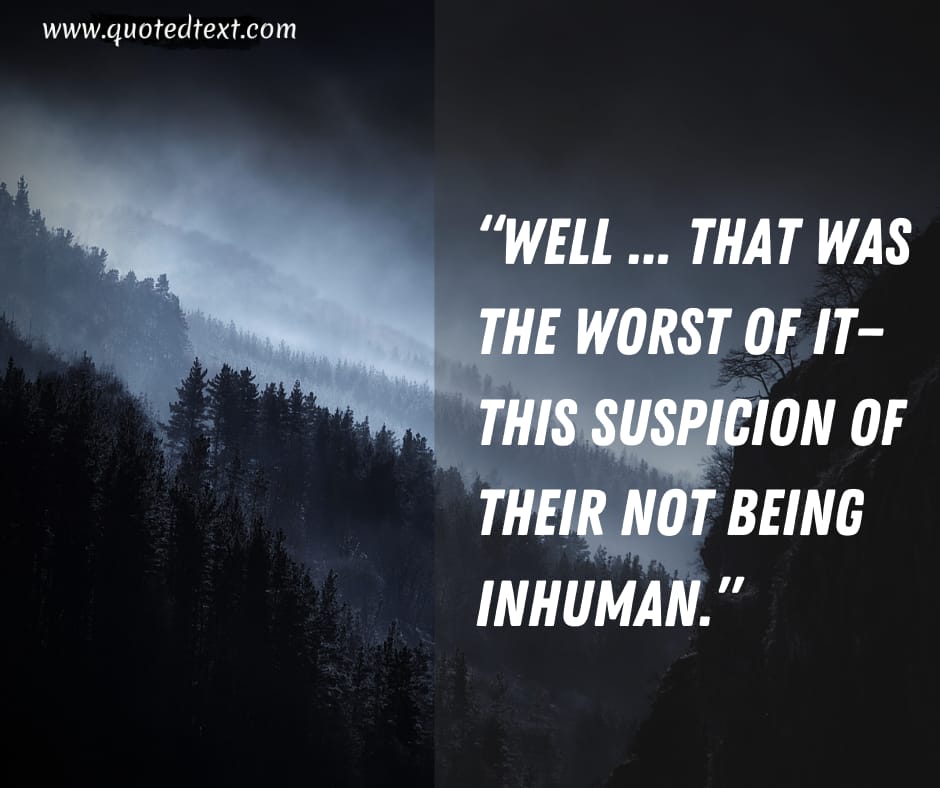 “Well … that was the worst of it—this suspicion of their not being inhuman.” 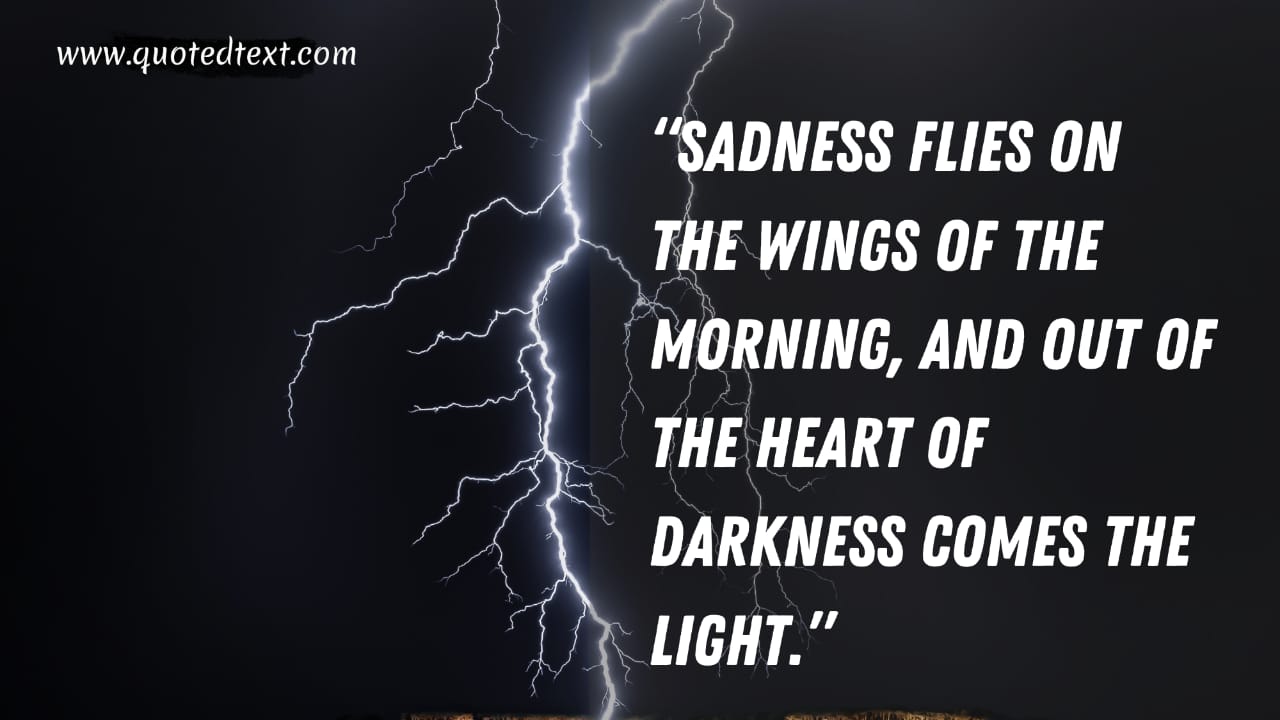 “Sadness flies on the wings of the morning, and out of the heart of darkness comes the light.”

10th of Heart of Darkness Quotes 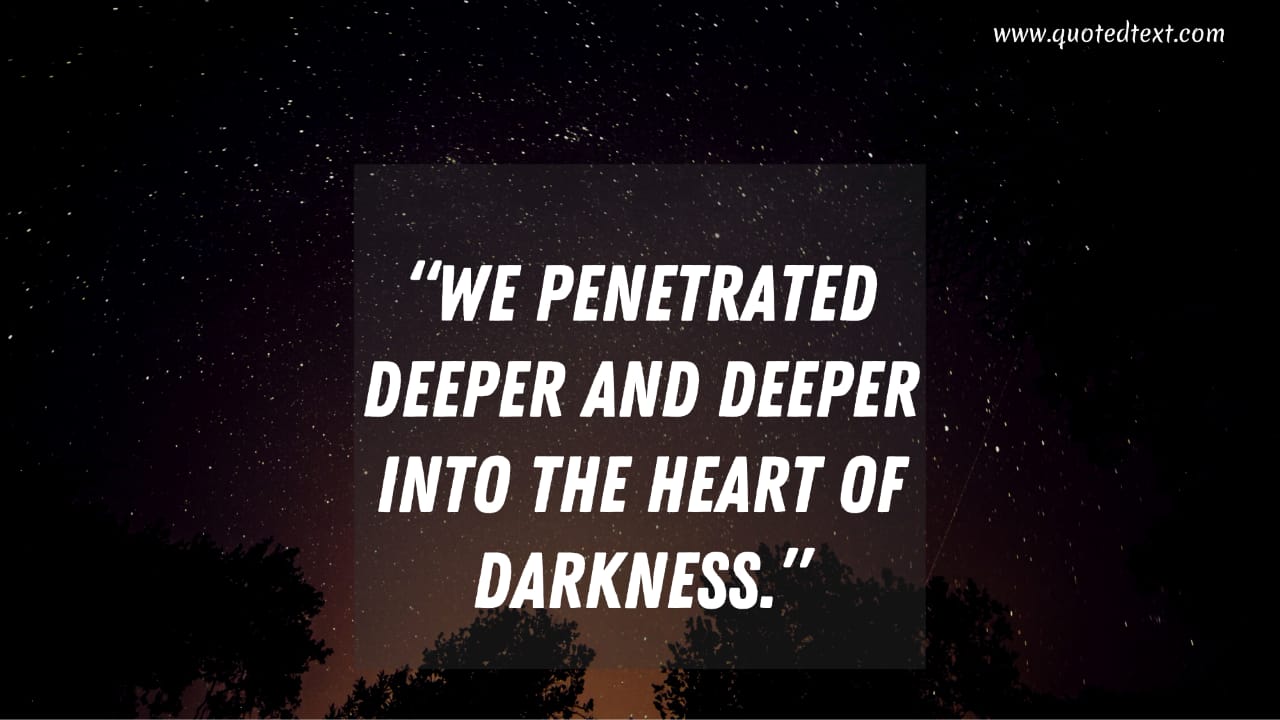 “We penetrated deeper and deeper into the heart of darkness.” 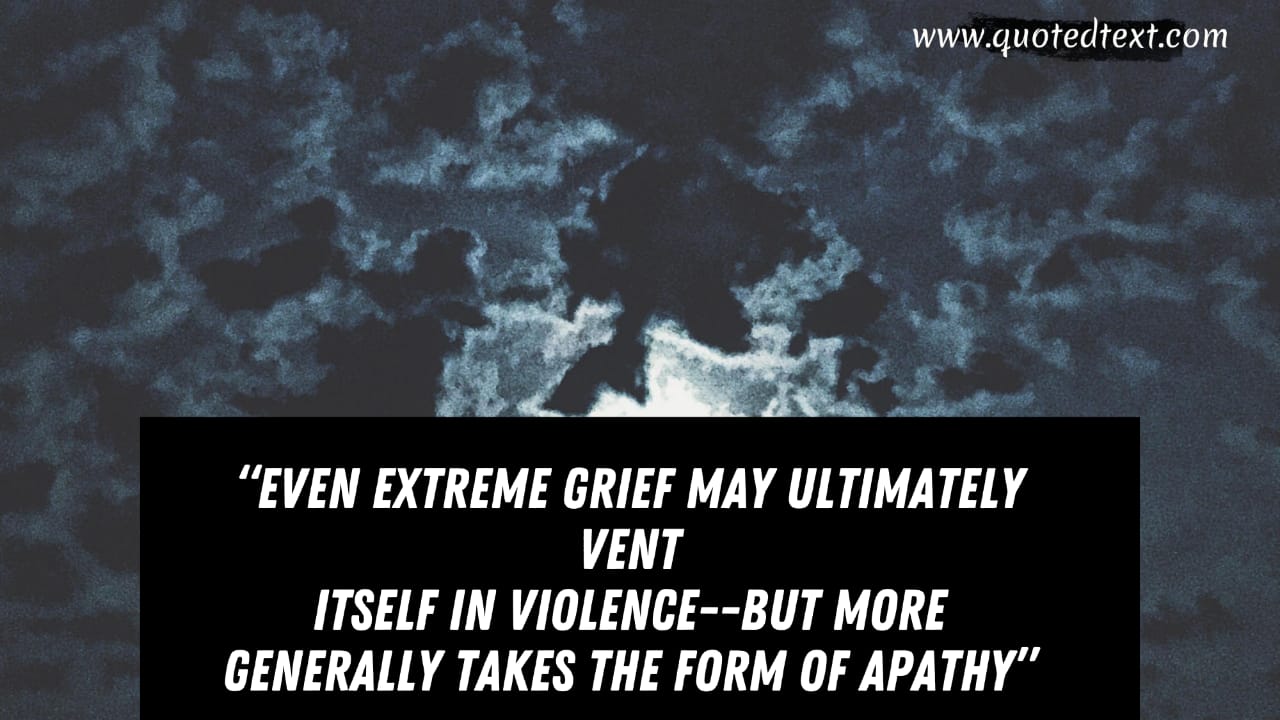 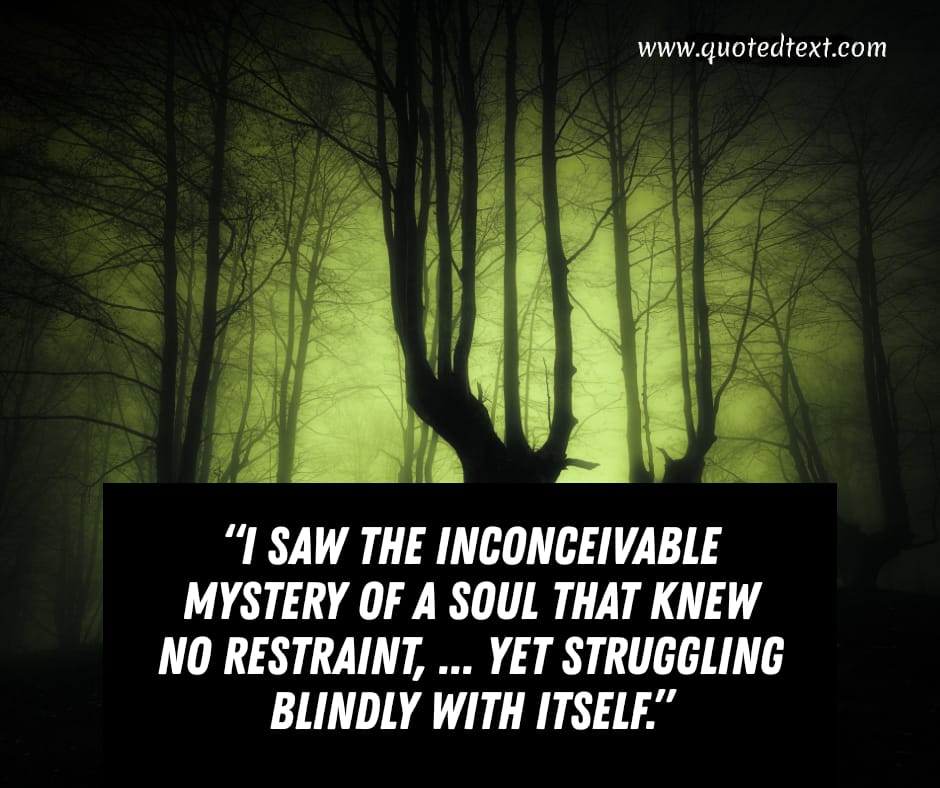 “I saw the inconceivable mystery of a soul that knew no restraint, … yet struggling blindly with itself.” 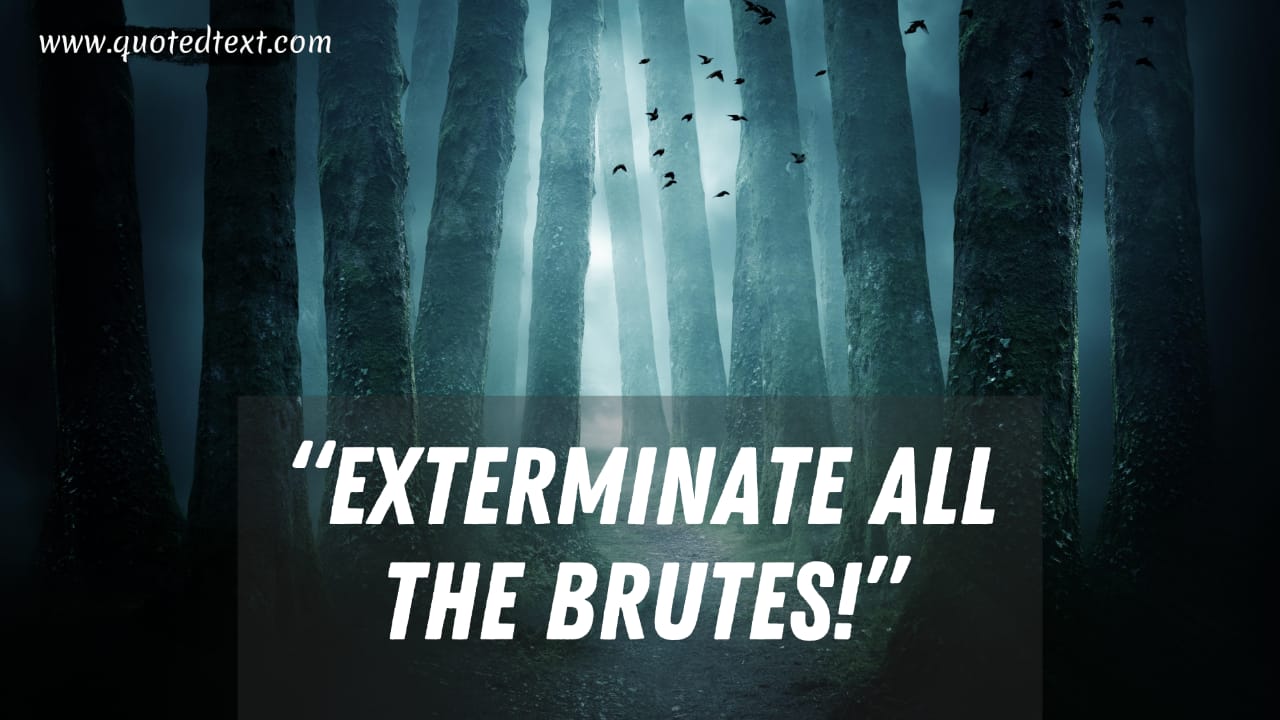 “Exterminate all the brutes!” 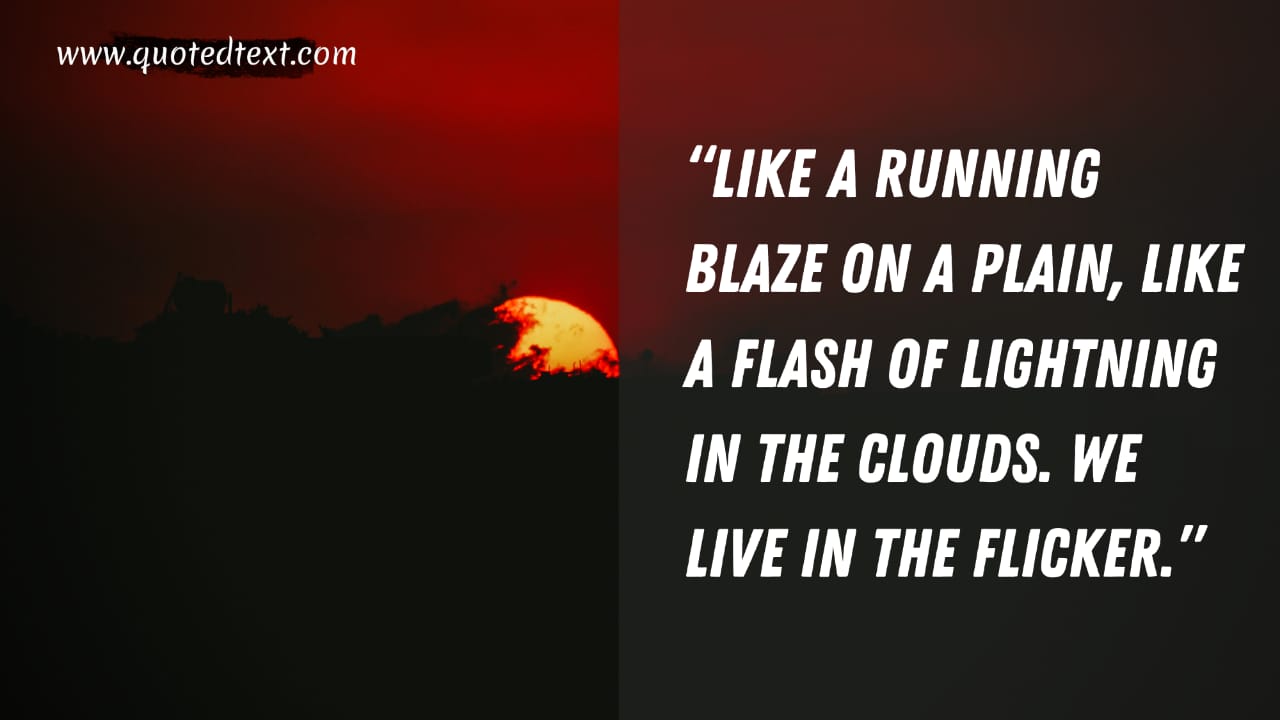 “Like a running blaze on a plain, like a flash of lightning in the clouds. We live in the flicker.” 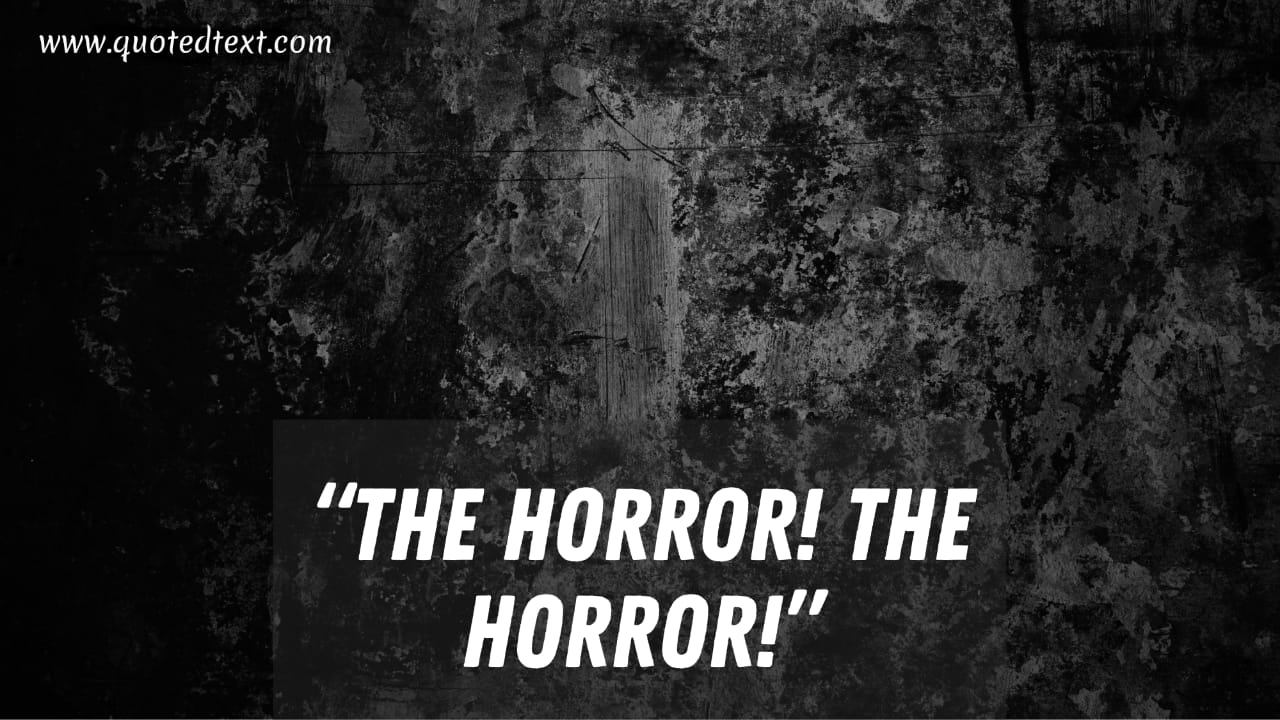 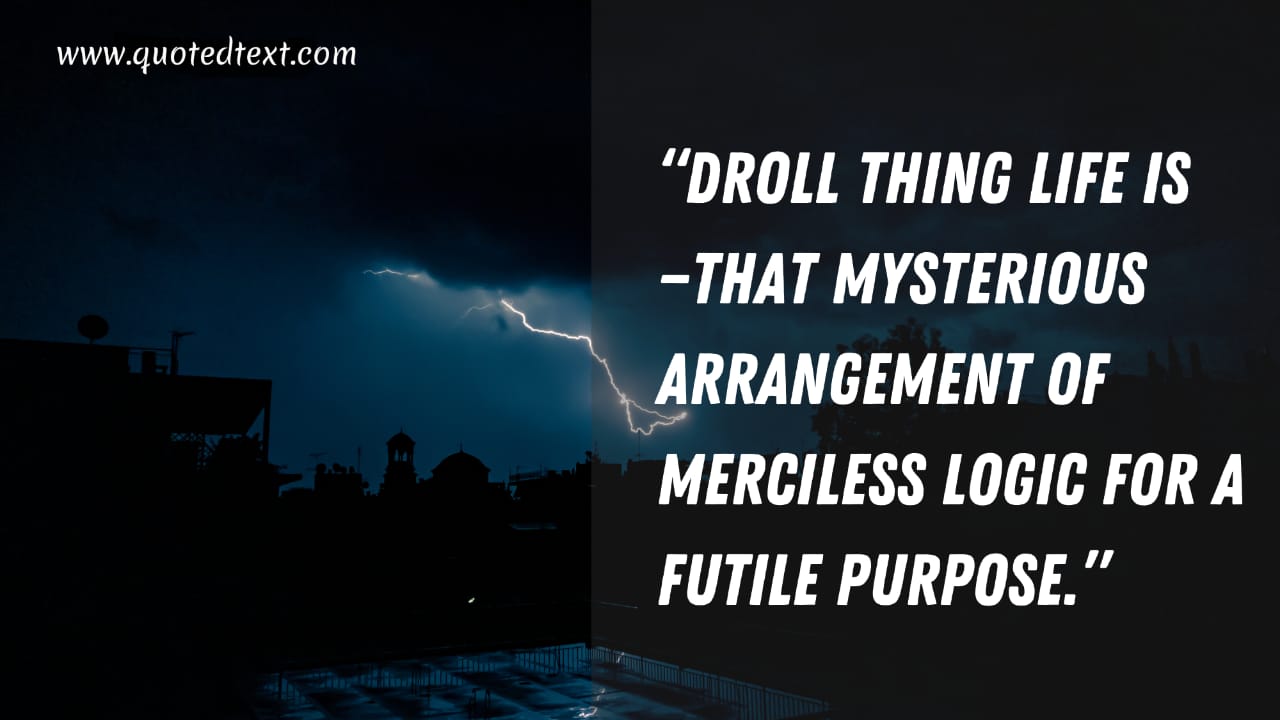 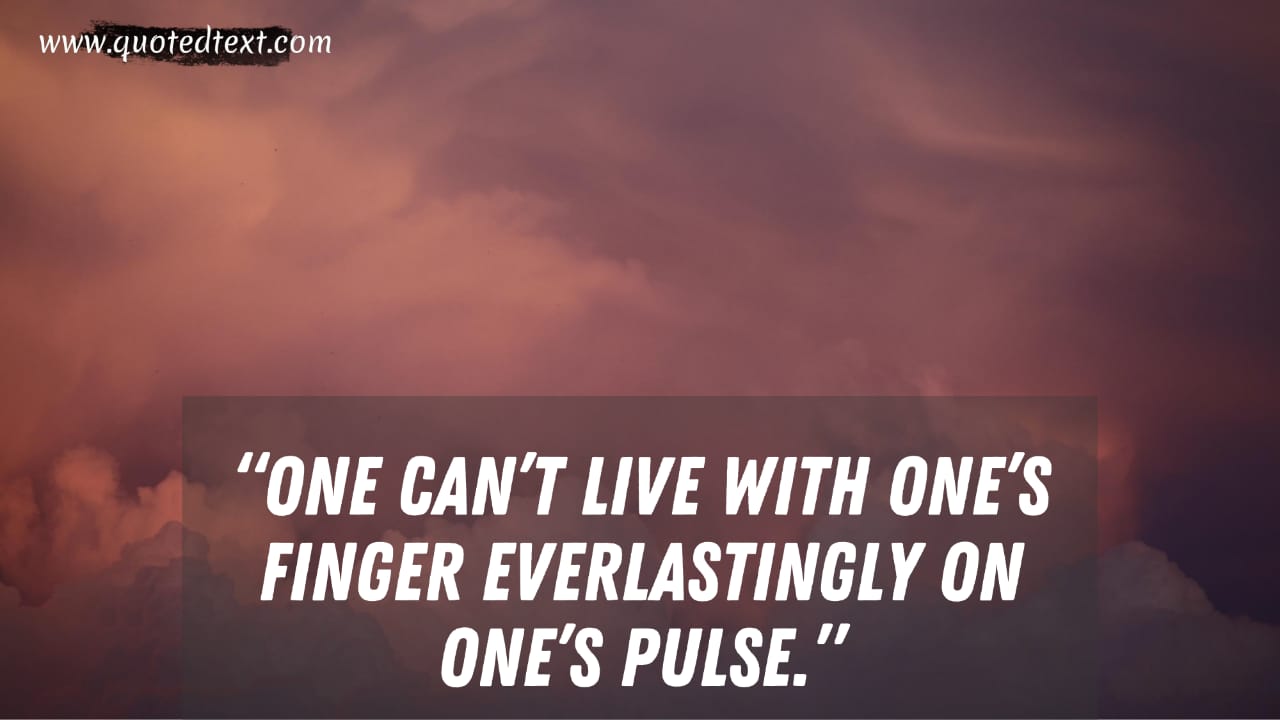 “One can’t live with one’s finger everlastingly on one’s pulse.” 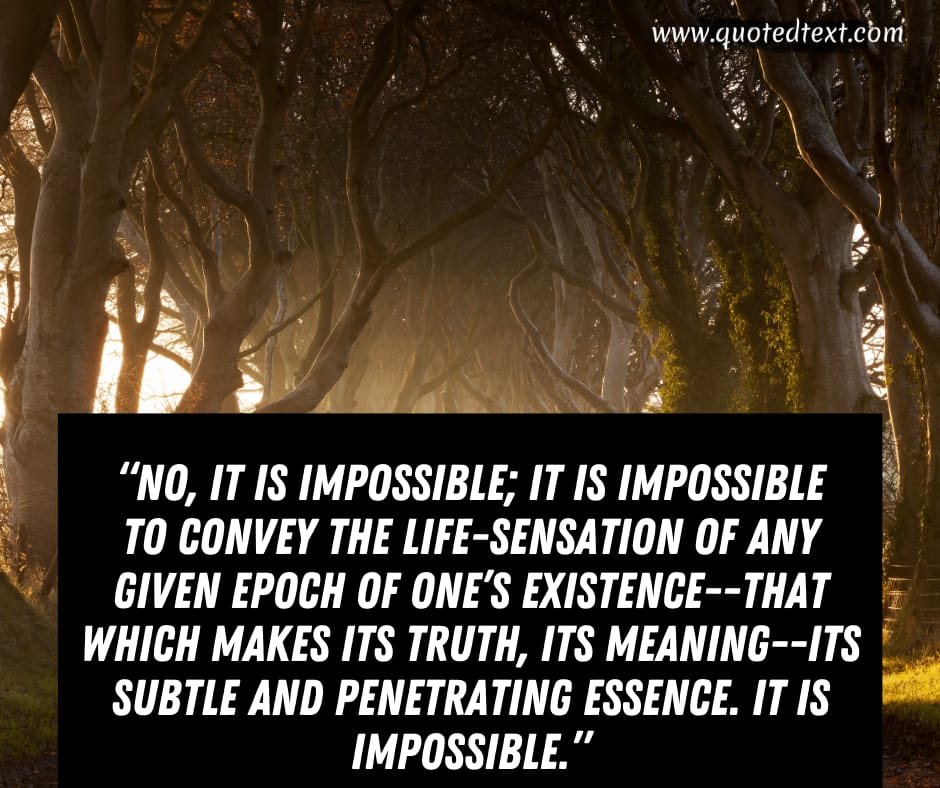 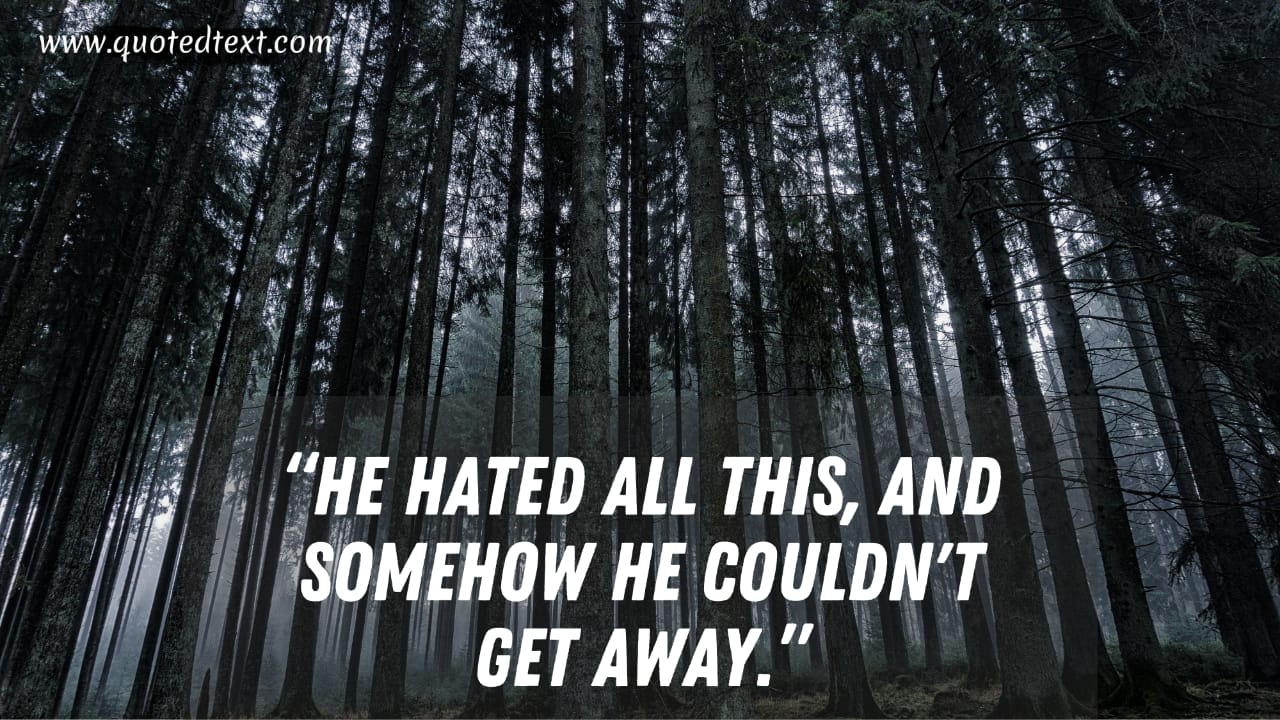 “He hated all this, and somehow he couldn’t get away.”

20th of Heart of Darkness Quotes 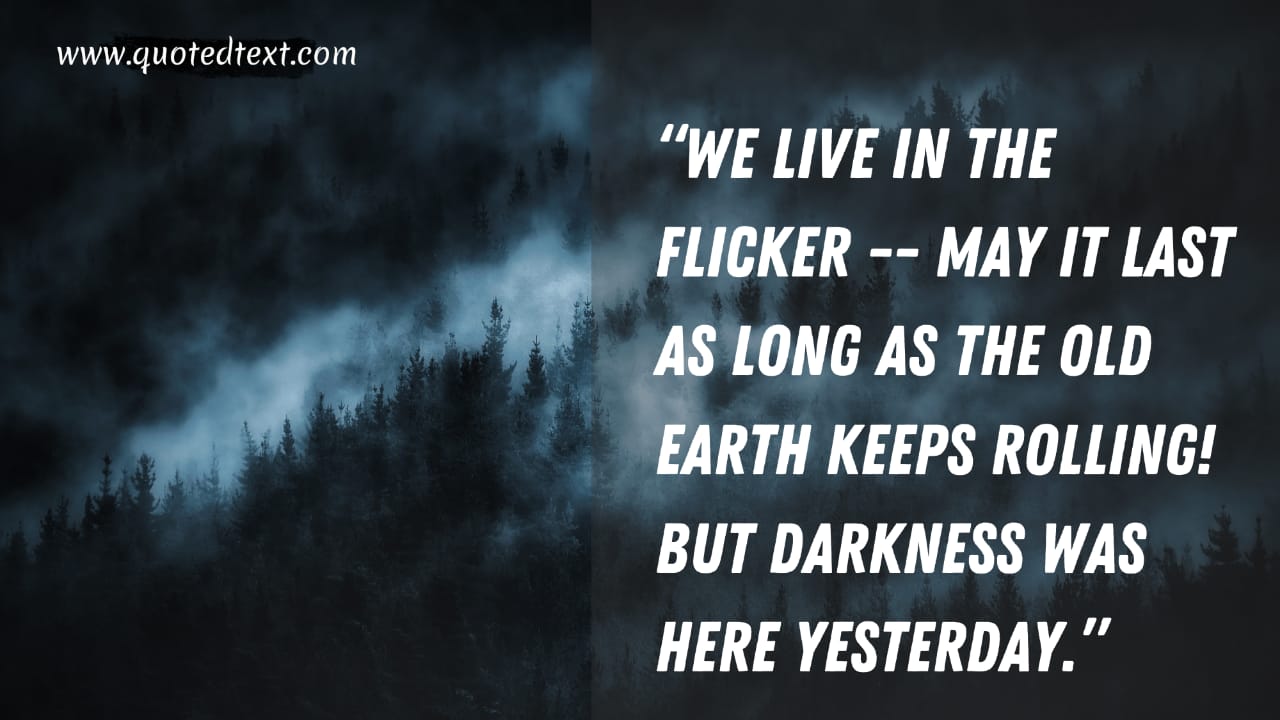 “We live in the flicker — may it last as long as the old earth keeps rolling! But darkness was here yesterday.” 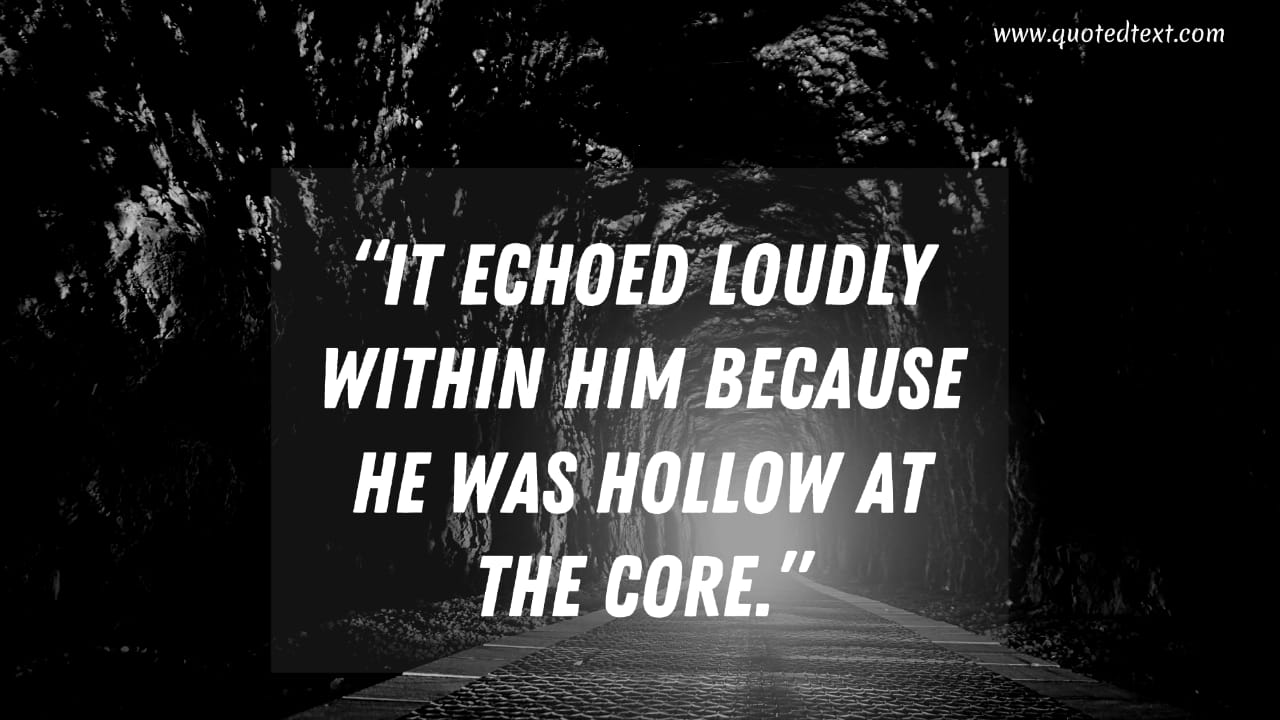 “It echoed loudly within him because he was hollow at the core.” 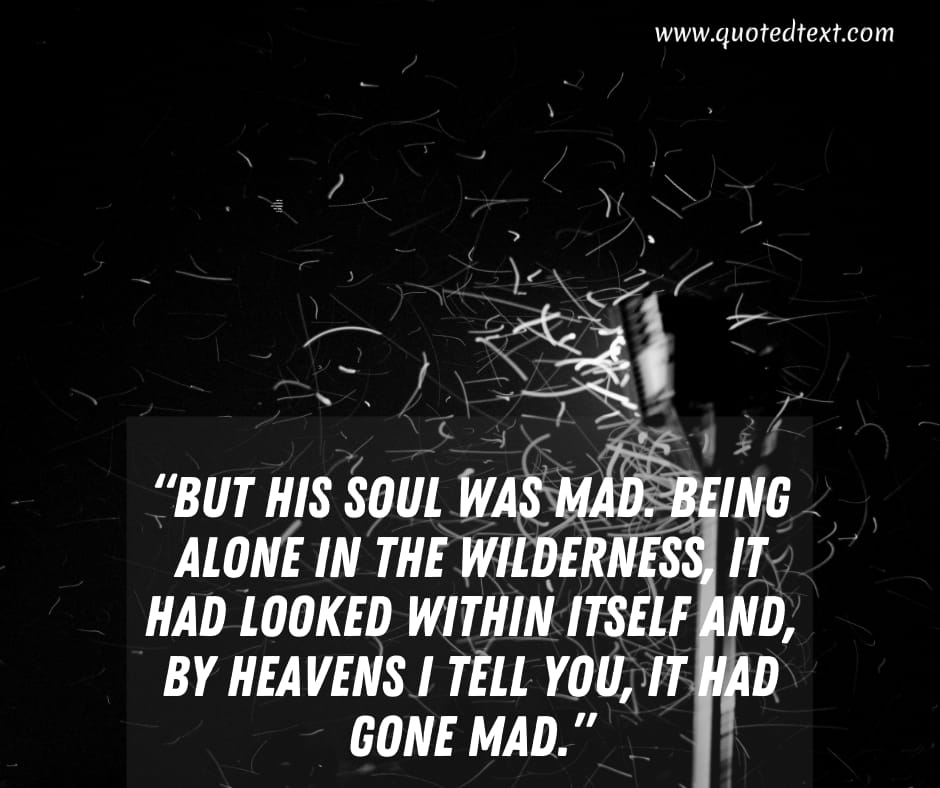 “But his soul was mad. Being alone in the wilderness, it had looked within itself and, by heavens I tell you, it had gone mad.” 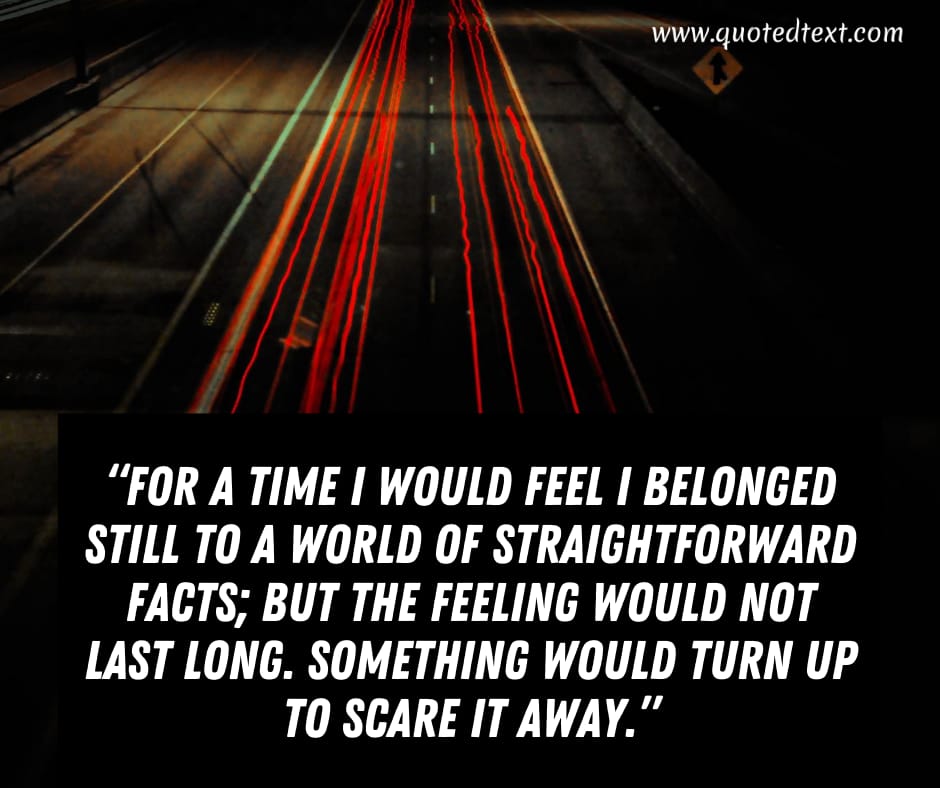 “For a time I would feel I belonged still to a world of straightforward facts; but the feeling would not last long. Something would turn up to scare it away.”

Heart Of Darkness, The classic literature novella is one of those books everyone has fun reading. It has a bit of suspense and darkness within the storyline, as the book title suggests. Readers love the way Joseph Conrad presented the story in a handsome sum of words. This all-time-hit is still quite famous and preferably the one you should start reading right away.

Let us know your views about this article on Heart of Darkness quotes in the comments below.

35 Best You are Amazing Quotes