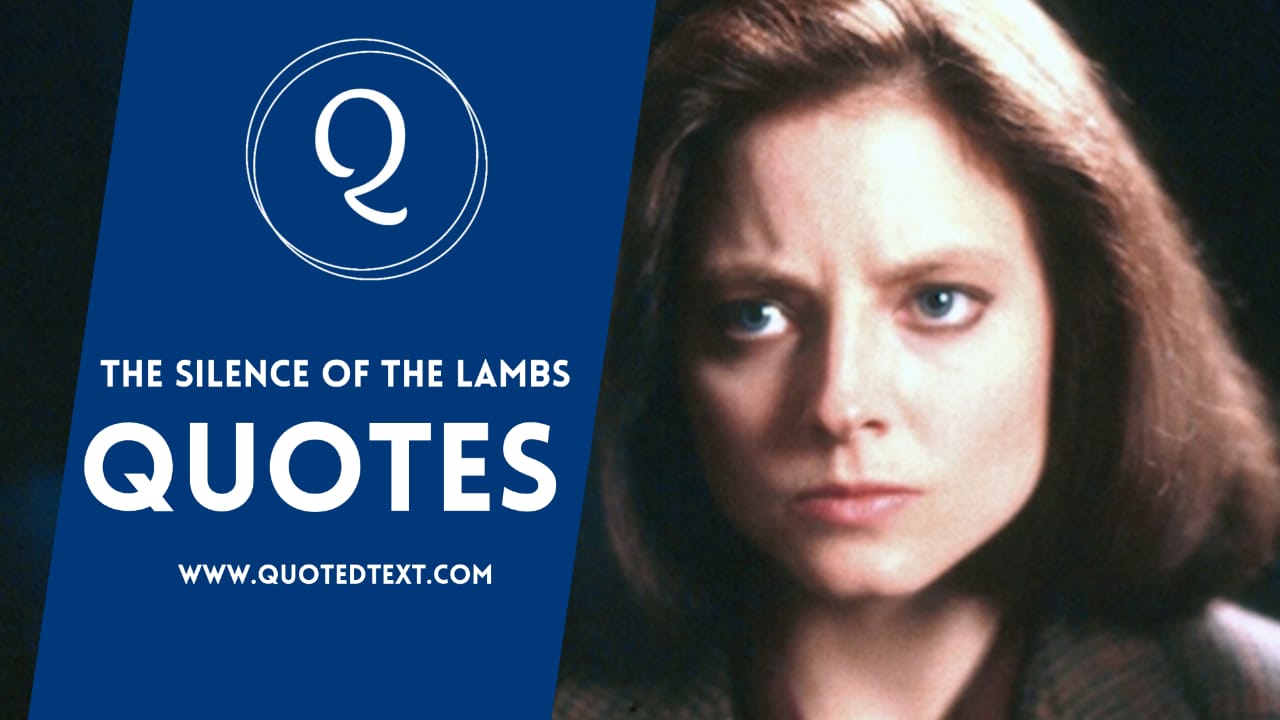 The Silence of The Lambs is an American Psychological Thriller released in 1991. This film is based on a 1988 Novel ‘The Silence of The Lambs’, written by Thomas Harris. Readers had lots of hopes with this film, which got fulfilled under the magnificent direction of Jonathan Demme. The Silence of The Lambs became the 5th most grossing film in 1991 with an initial budget of $19 million and earned over $272.72 million globally. All the love and admiration reader fans gave this film earned it tons of awards.

The storyline of the film The Silence of The Lambs rolls by introducing Clarice Starling, an FBI trainee who’s elected to interview a former psychiatrist, cannibal, and serial killer Hannibal Lecter. This interrogation goes around Buffalo Bill, a serial killer. Hannibal decides to help and cooperate with her in this interrogation. He asks her to find an old patient of his without telling her why. On her way to do so, she finds him tortured with a moth stuck in his throat. Now Lecter reveals to her that she encountered the man linked to Buffalo Bill, her target. Lecter makes it clear to her that he’ll help her further if Clarice helps him shift to a different facility. He furthermore asks her to arbitrage her life’s secret info with him in exchange for clues leading her to Bill.

The further story of The Silence of The Lamb goes about the interrogation and how Clarice solves this mystery.

Clarice Starling is a very sharp-minded, intelligent, dangerous, and introverted personality. She is very affected by the unfortunate events in her past, which always makes her want to run away. The occurrence of her father’s death shook her and scared her off life. She gets to interview a psychiatrist and murderer, Hannibal Lecter, who is quite a mastermind. He’s quite peculiar when it comes to his tricks and moves. Lecter is very fond of fooling people into eating them, which clearly shows how clever he is. He’s not the one to be messed with, and entirely not the one who can be understood. The mystery keeps going around this serial killer named Buffalo Bill, a murderer who’s famous about killing women and peeling the skin off their bodies. The storyline is quite the gem when it comes to this film, as often said by the viewers.

The Silence of the Lambs Quotes 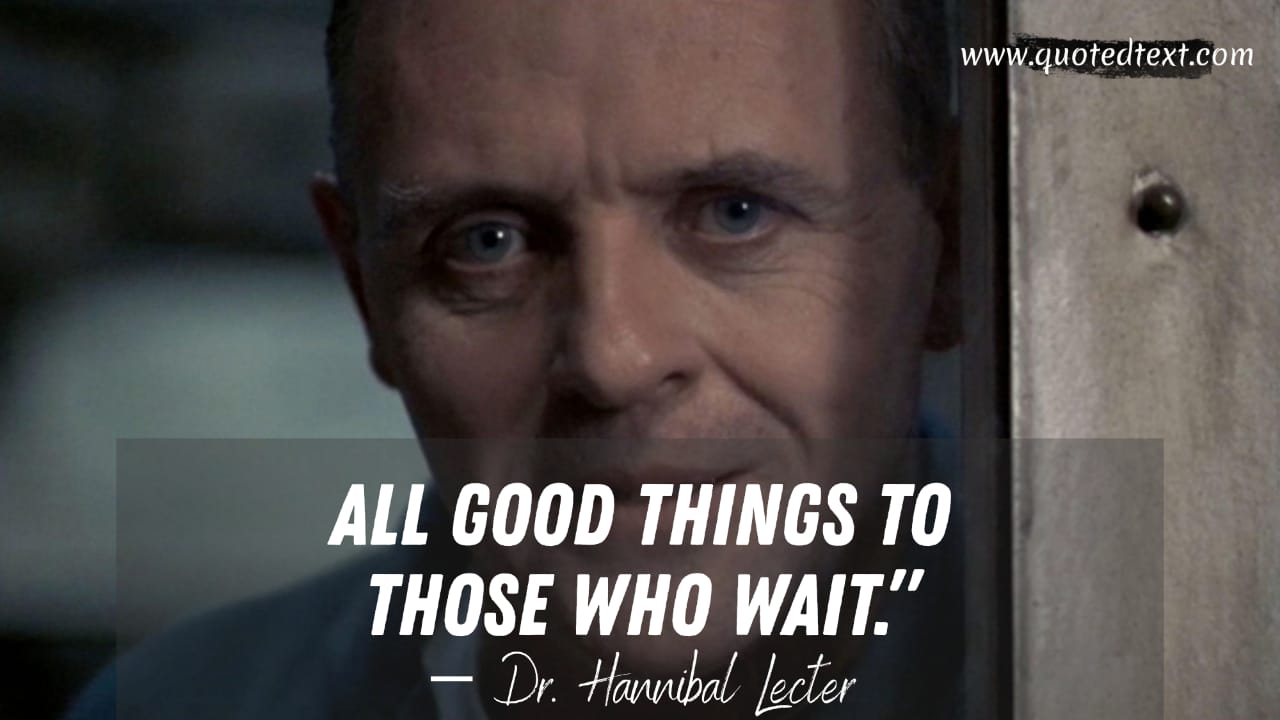 “All good things to those who wait.”
― Dr. Hannibal Lecter 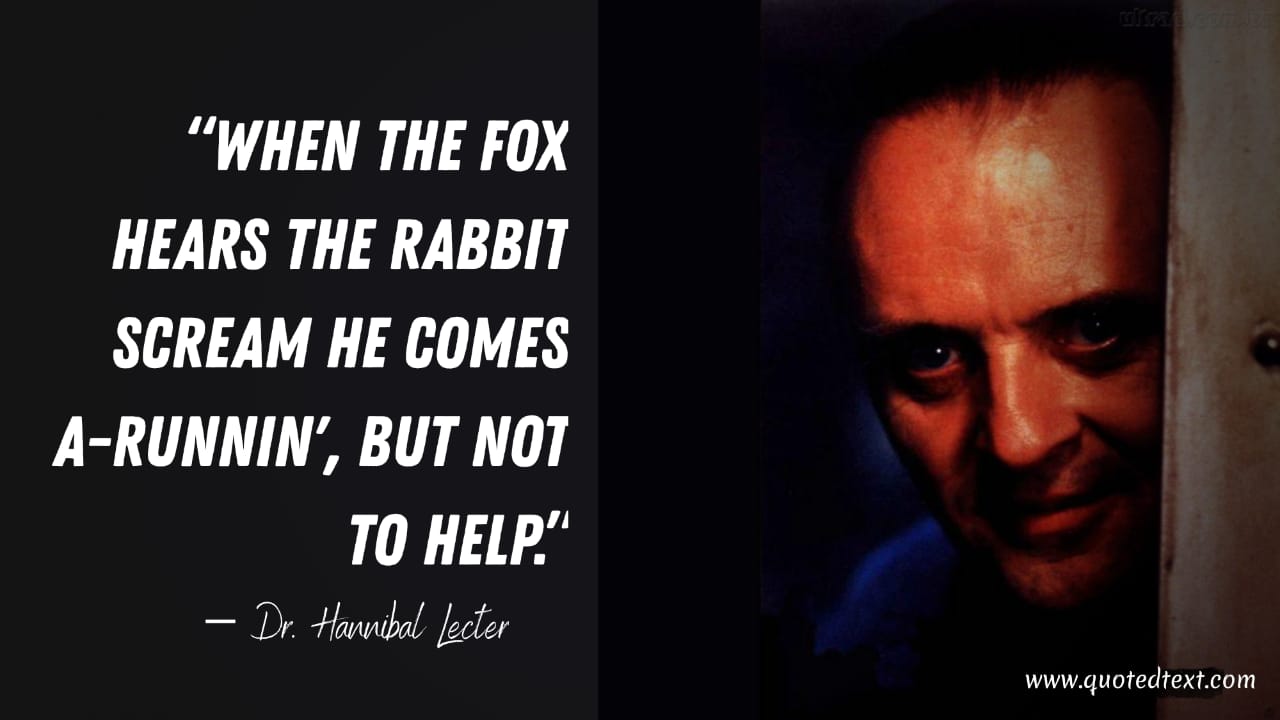 “When the Fox hears the Rabbit scream he comes a-runnin’, but not to help.”
― Dr. Hannibal Lecter 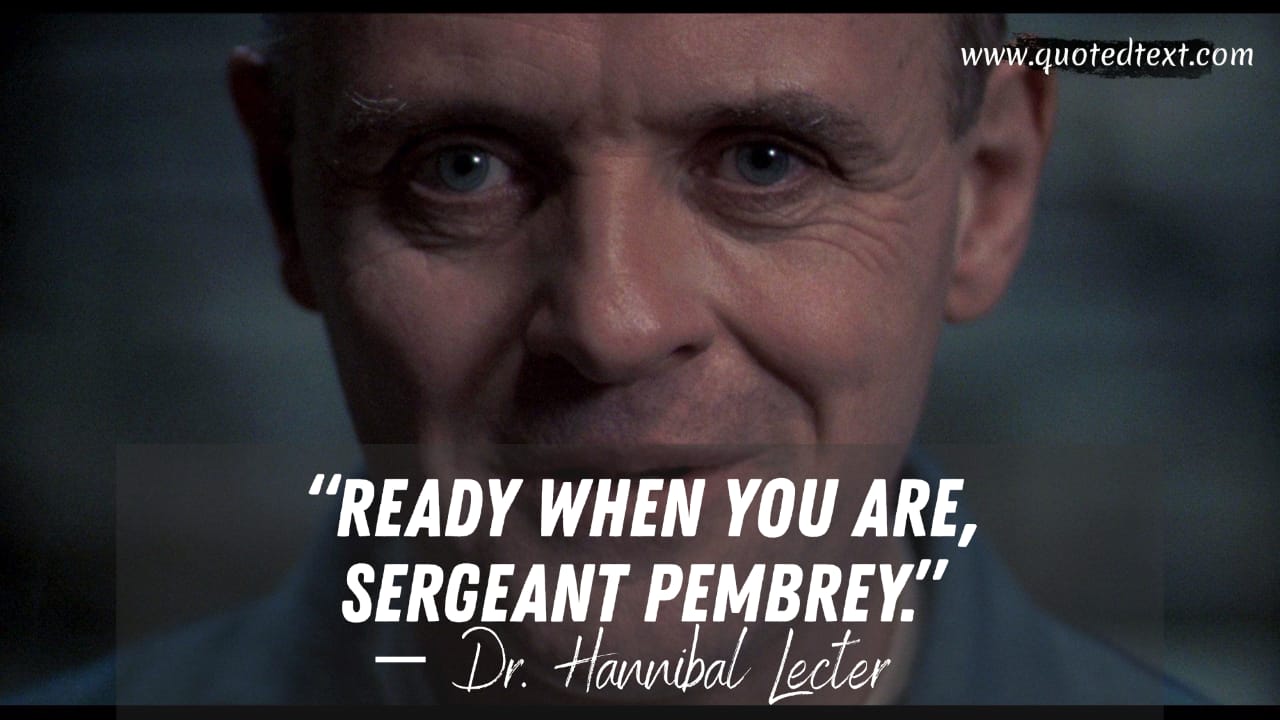 “Ready when you are, Sergeant Pembrey.”
― Dr. Hannibal Lecter 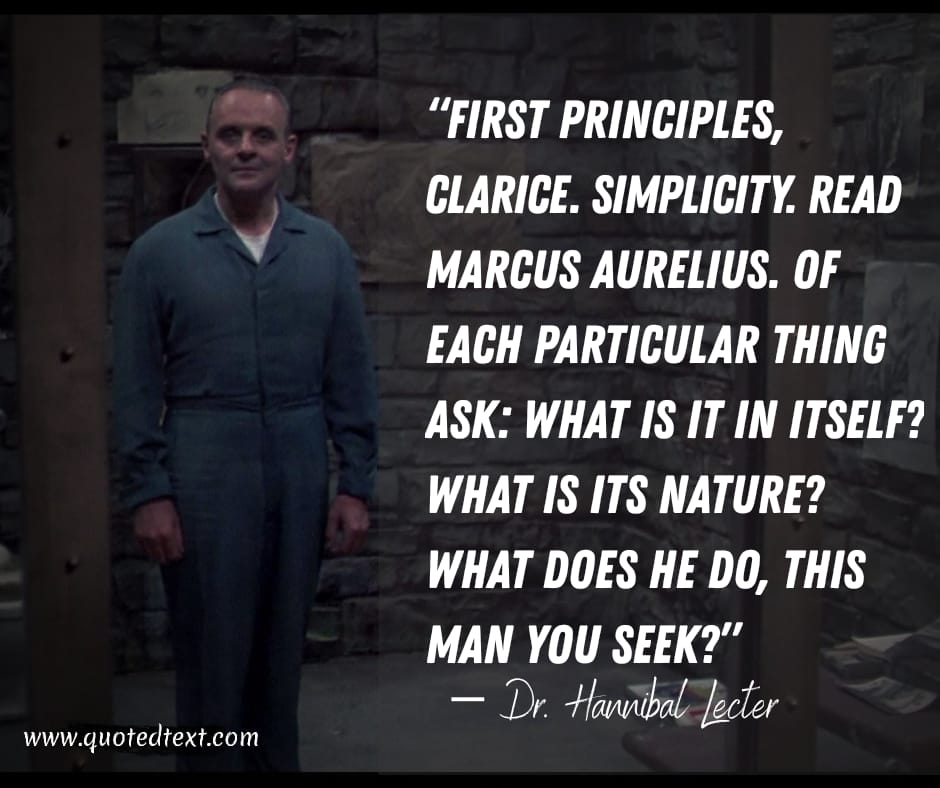 “First principles, Clarice. Simplicity. Read Marcus Aurelius. Of each particular thing ask: what is it in itself? What is its nature? What does he do, this man you seek?”
― Dr. Hannibal Lecter 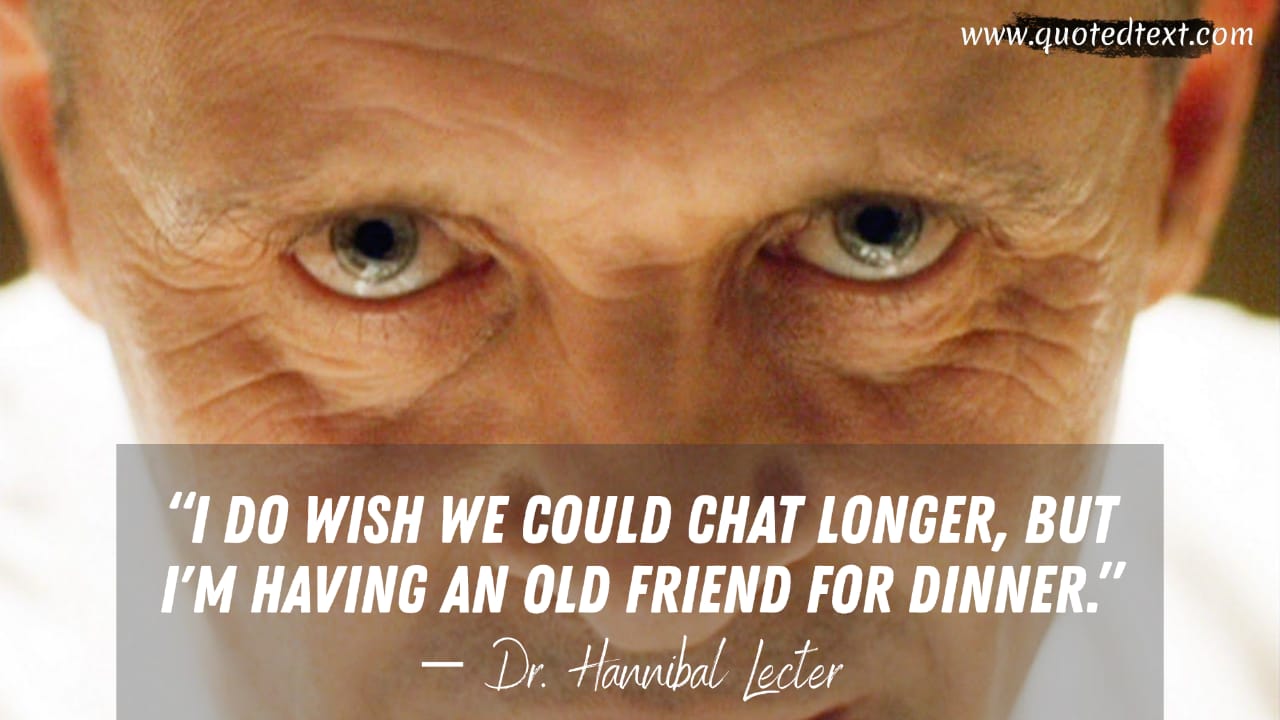 “I do wish we could chat longer, but I’m having an old friend for dinner.”
― Dr. Hannibal Lecter 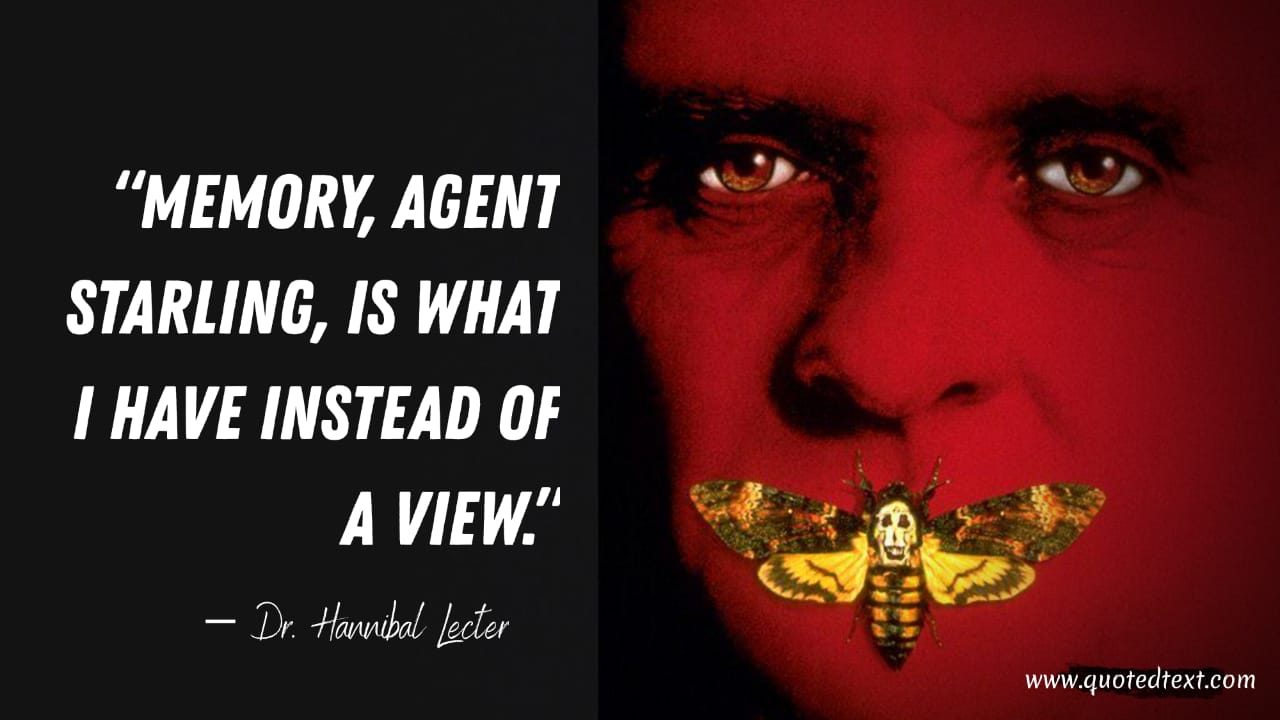 “Memory, Agent Starling, is what I have instead of a view.”
― Dr. Hannibal Lecter 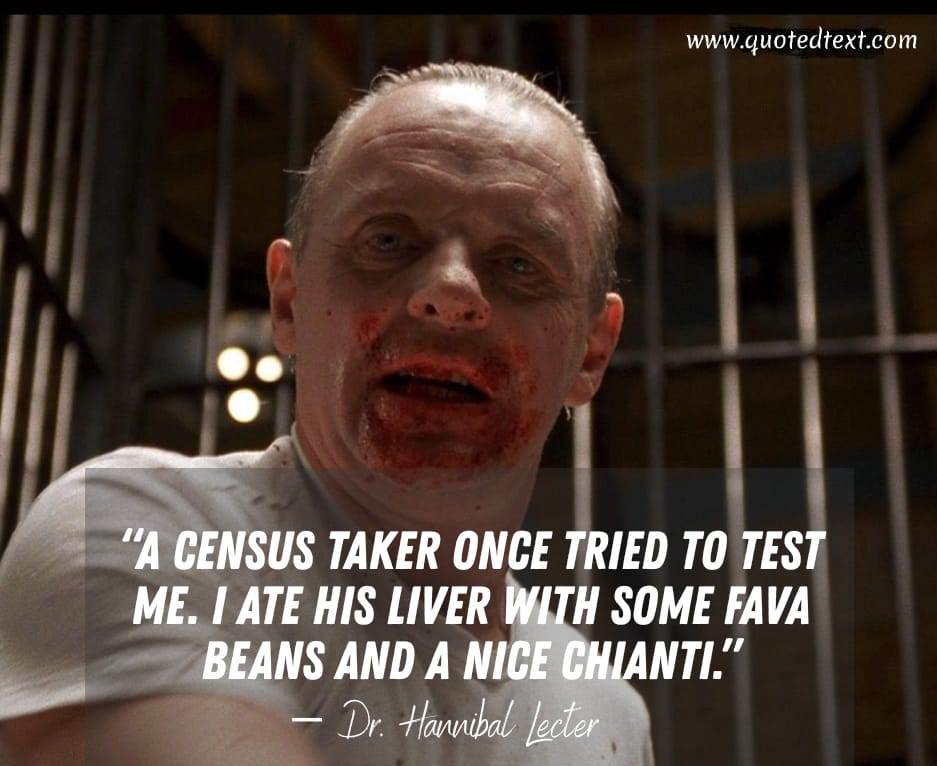 “A census taker once tried to test me. I ate his liver with some fava beans and a nice chianti.”
― Dr. Hannibal Lecter 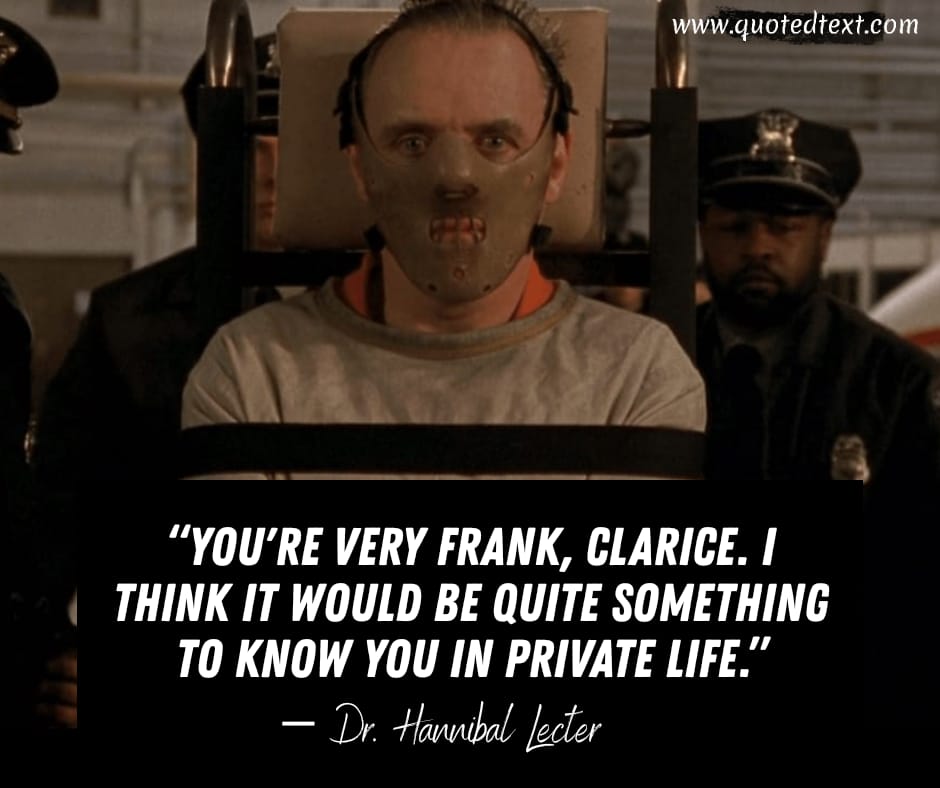 “You’re very frank, Clarice. I think it would be quite something to know you in private life.”
― Dr. Hannibal Lecter 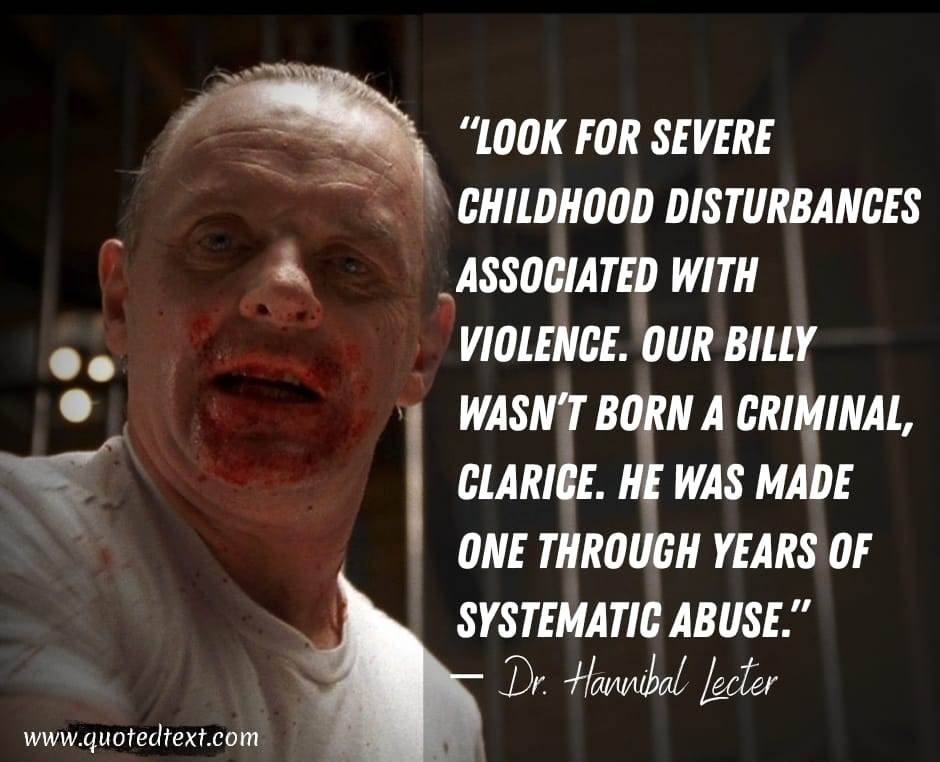 “Look for severe childhood disturbances associated with violence. Our Billy wasn’t born a criminal, Clarice. He was made one through years of systematic abuse.”
― Dr. Hannibal Lecter 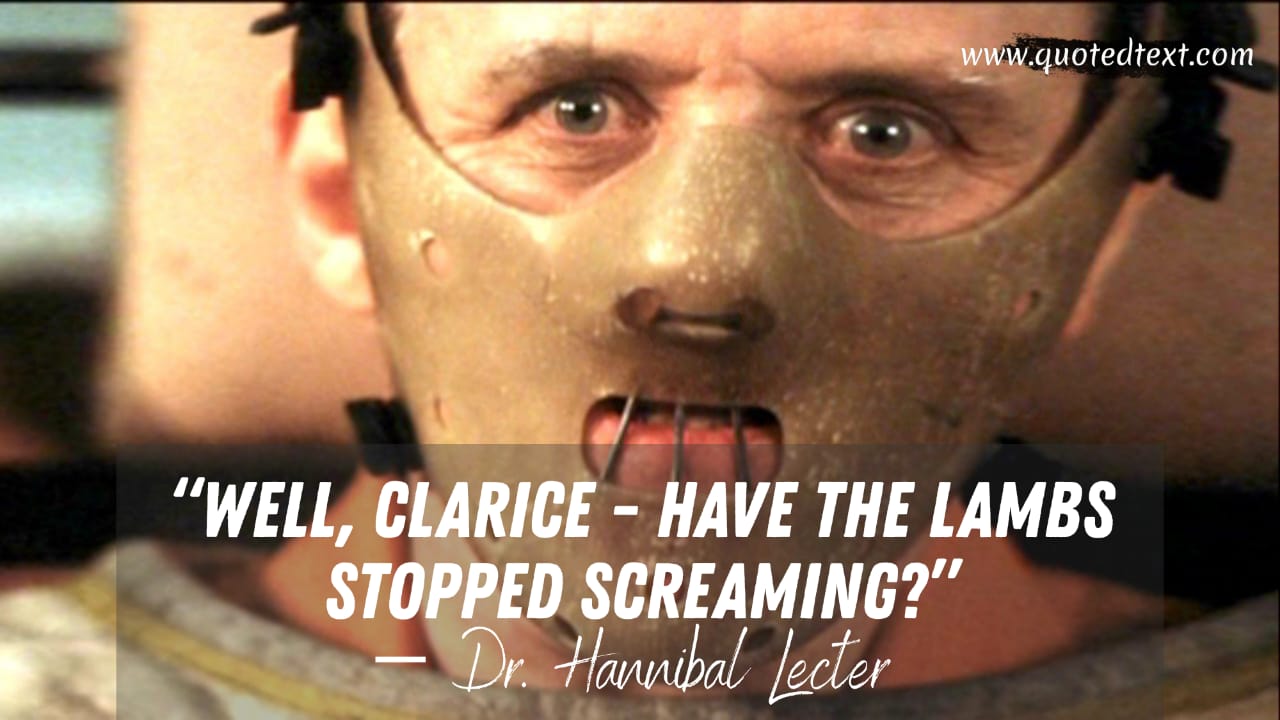 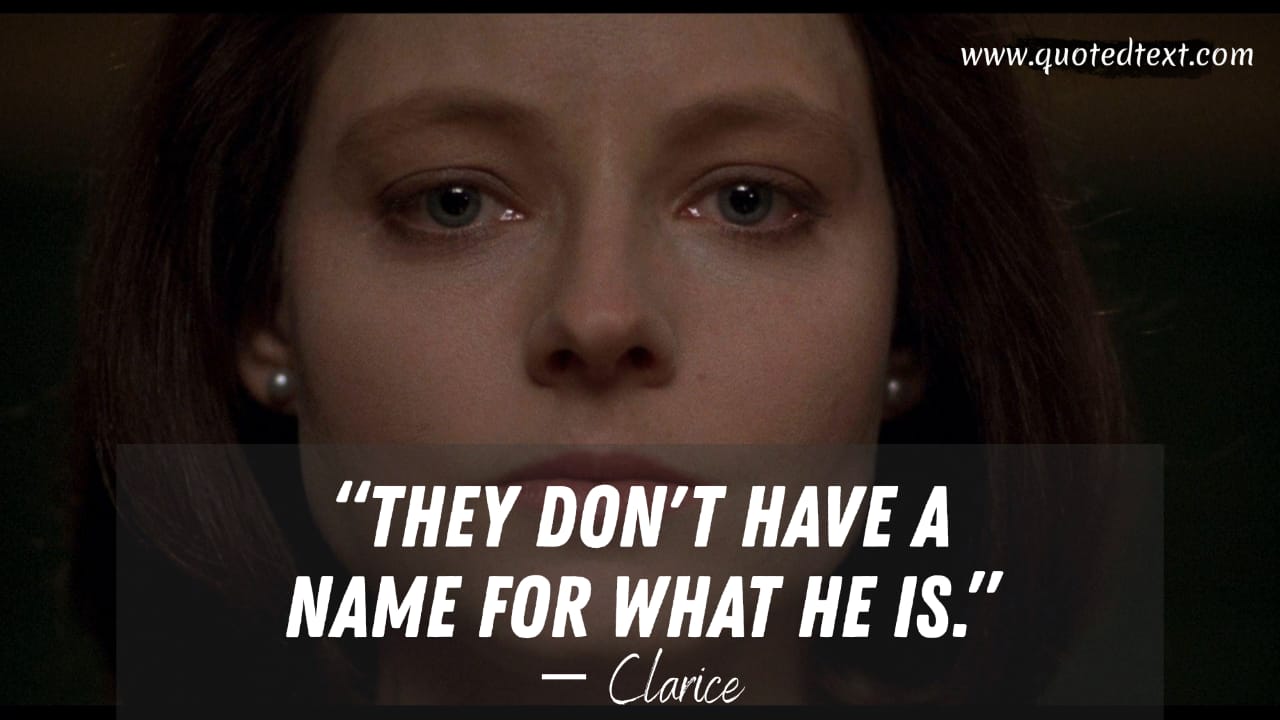 “They don’t have a name for what he is.”
― Clarice 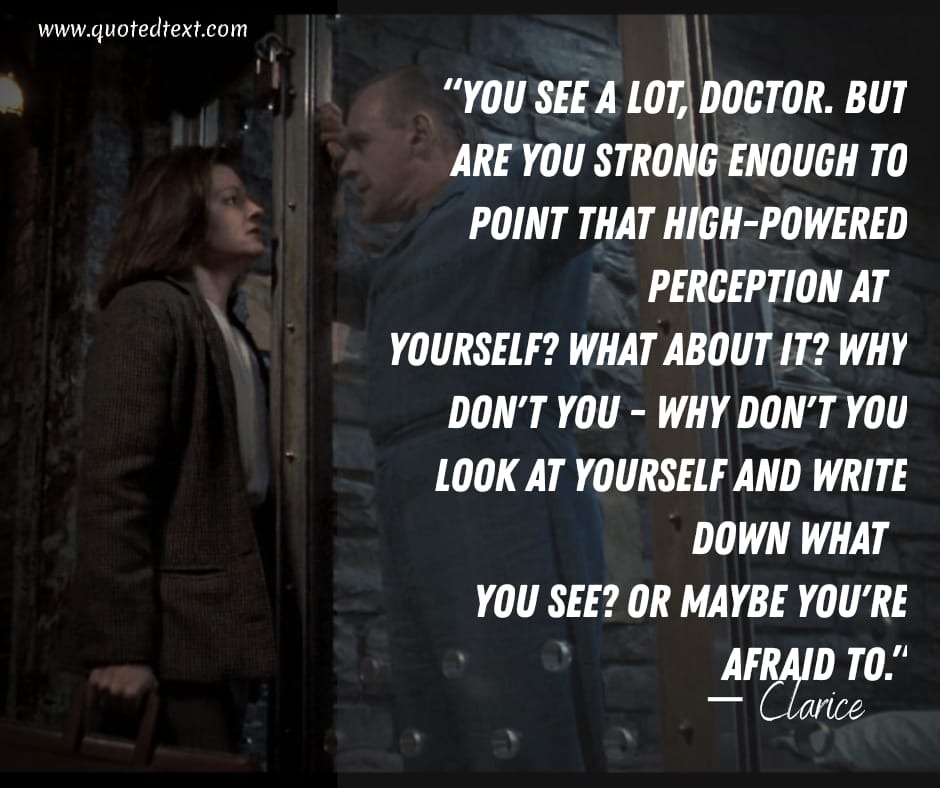 “You see a lot, Doctor. But are you strong enough to point that high-powered perception at yourself? What about it? Why don’t you – why don’t you look at yourself and write down what you see? Or maybe you’re afraid to.”
― Clarice 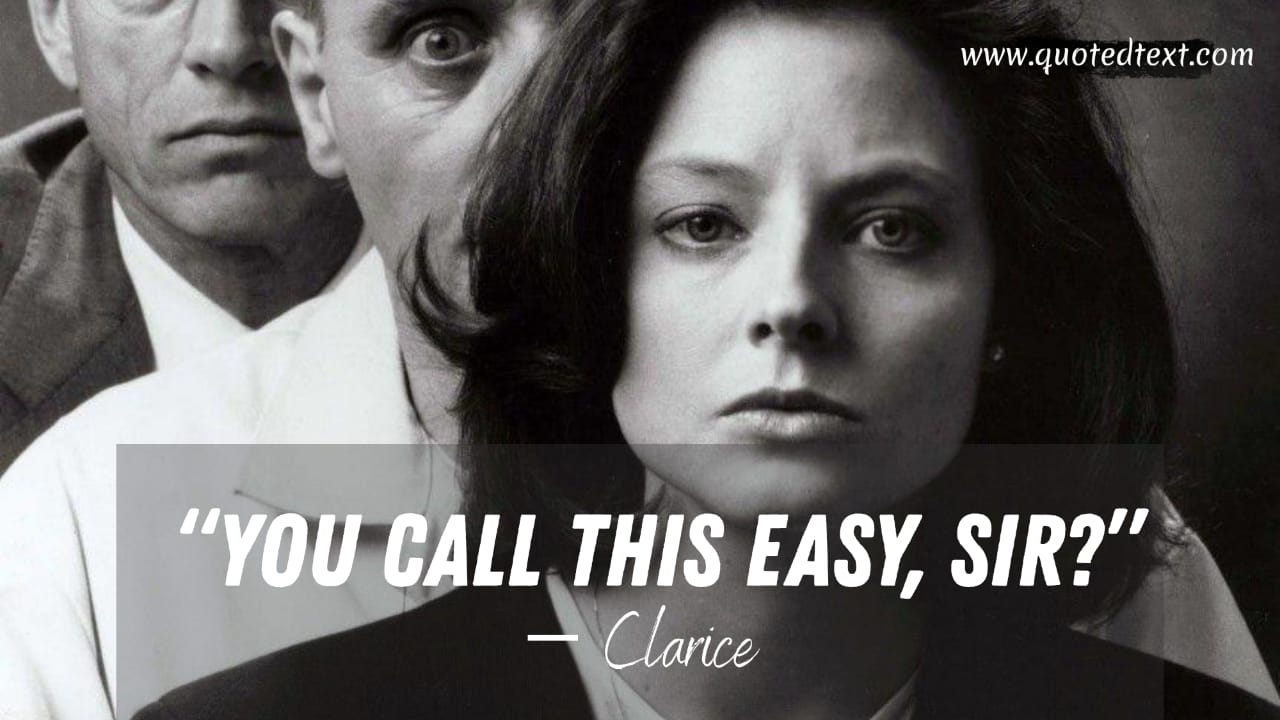 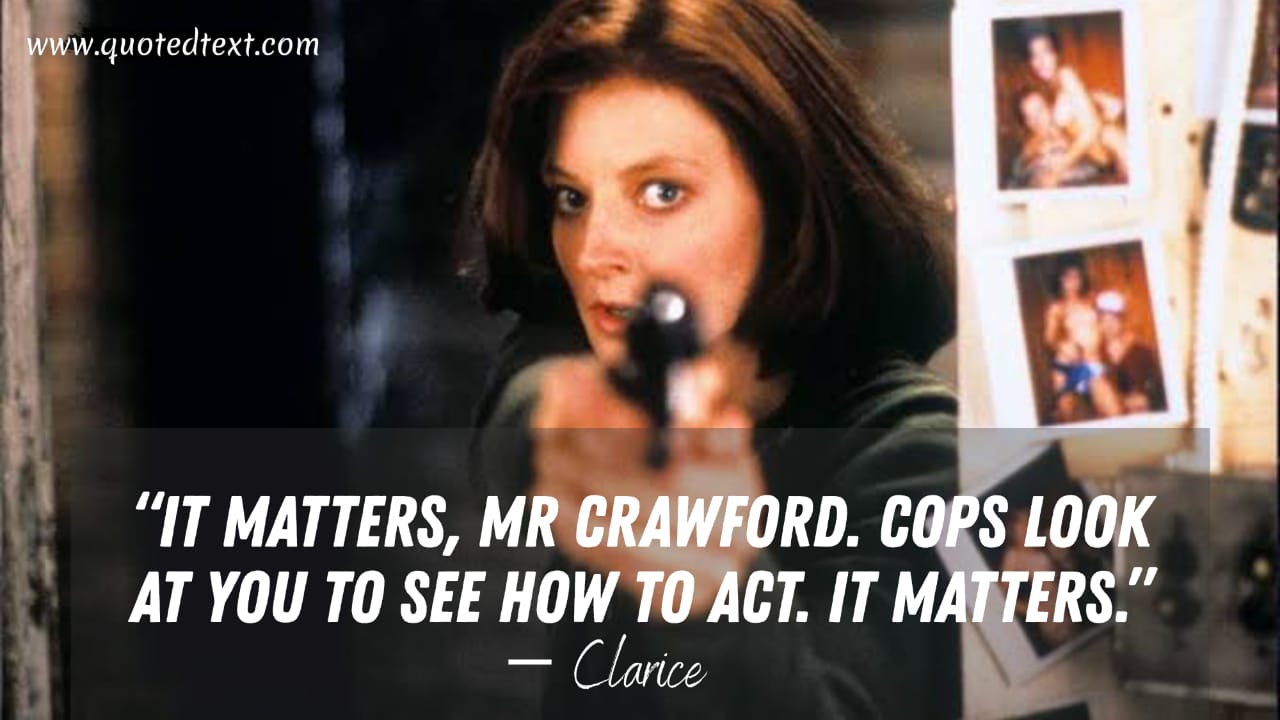 “It matters, Mr Crawford. Cops look at you to see how to act. It matters.”
― Clarice 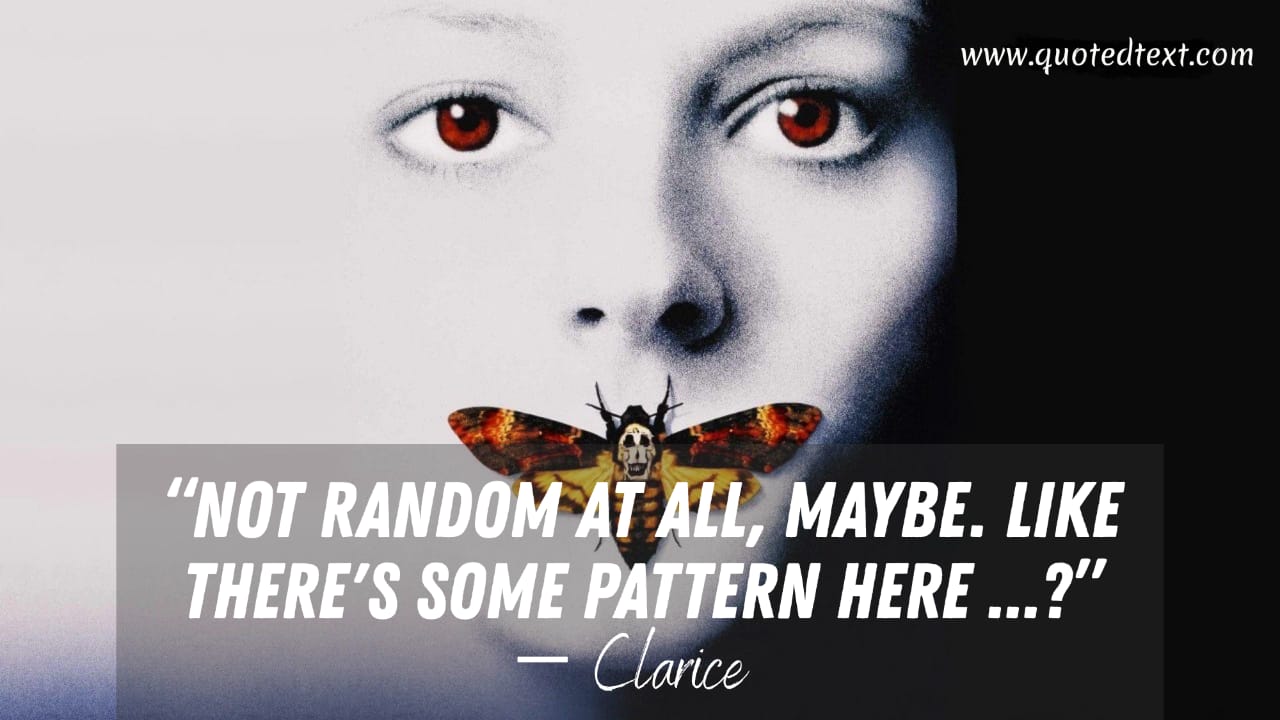 “Not random at all, maybe. Like there’s some pattern here …?”
― Clarice 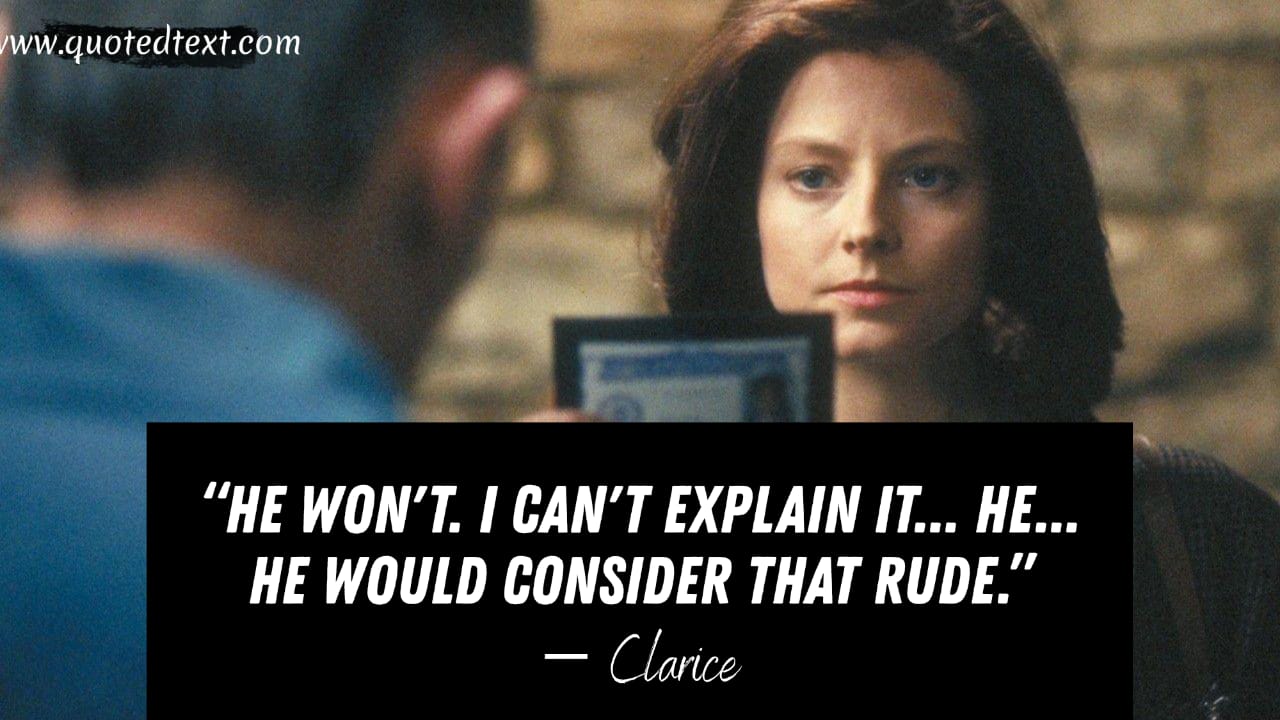 “He won’t. I can’t explain it… he… he would consider that rude.”
― Clarice 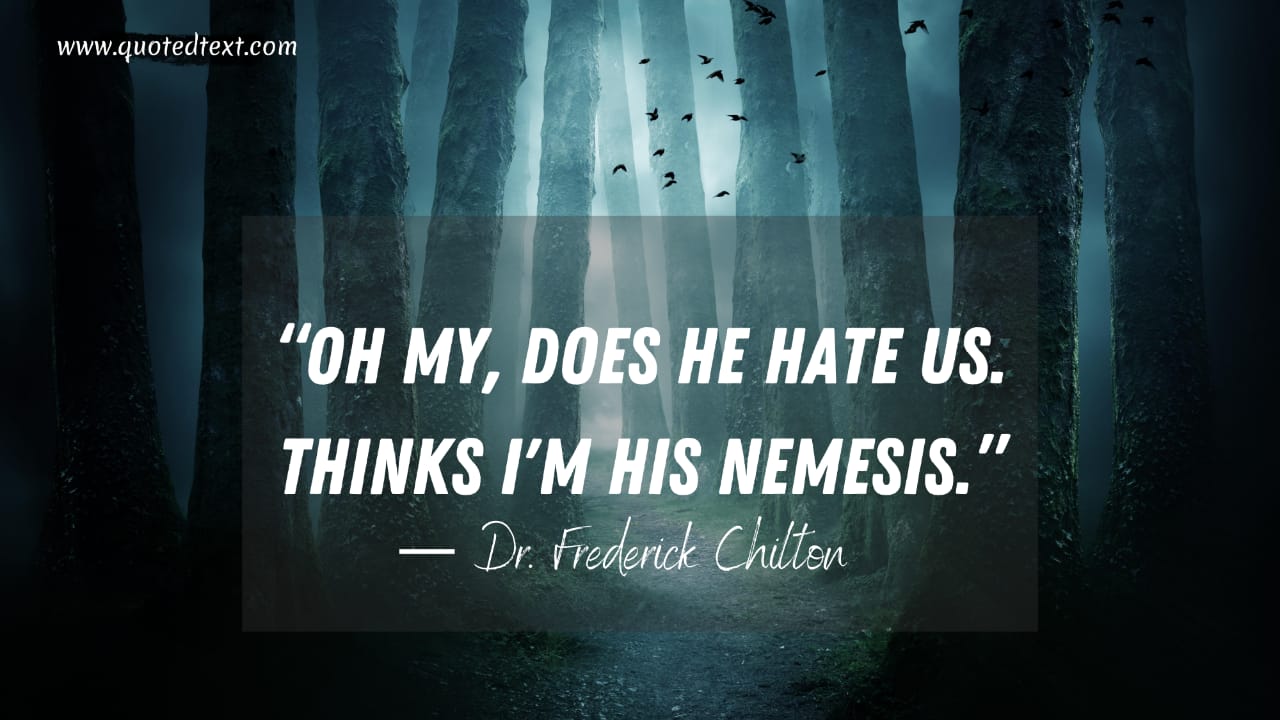 “Oh my, does he hate us. Thinks I’m his nemesis.”
― Dr. Frederick Chilton 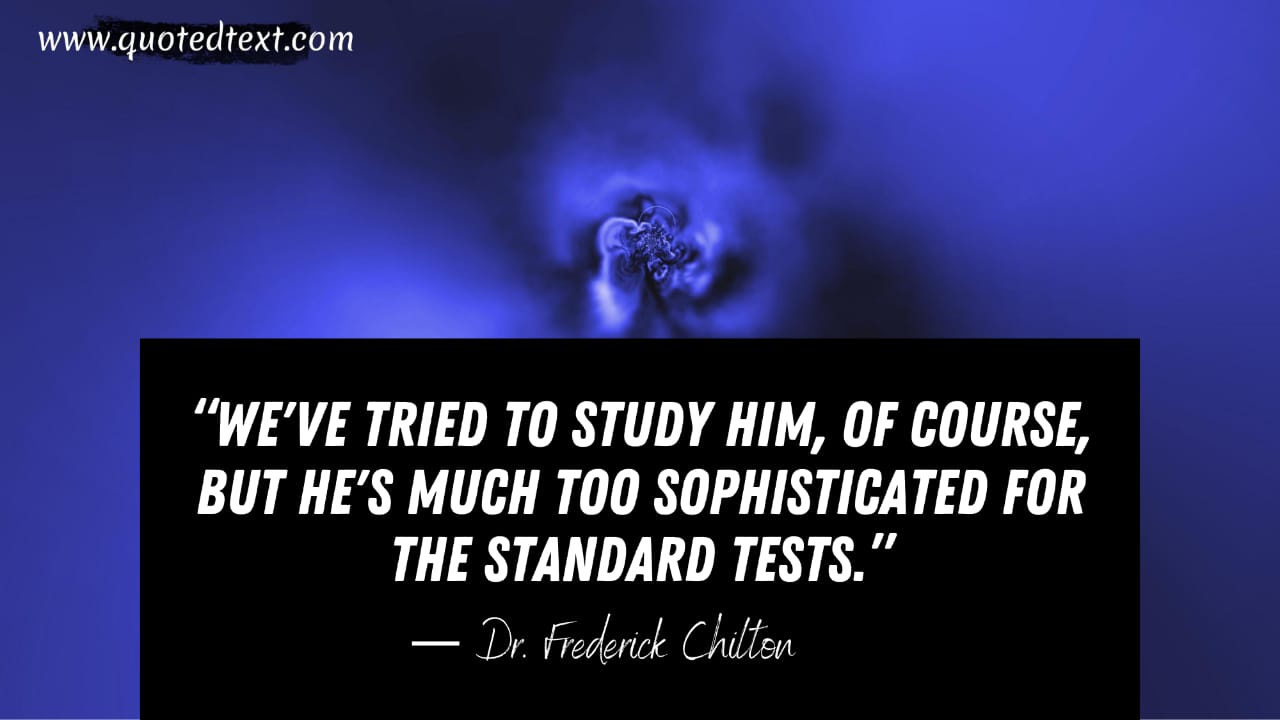 “We’ve tried to study him, of course, but he’s much too sophisticated for the standard tests.”
― Dr. Frederick Chilton 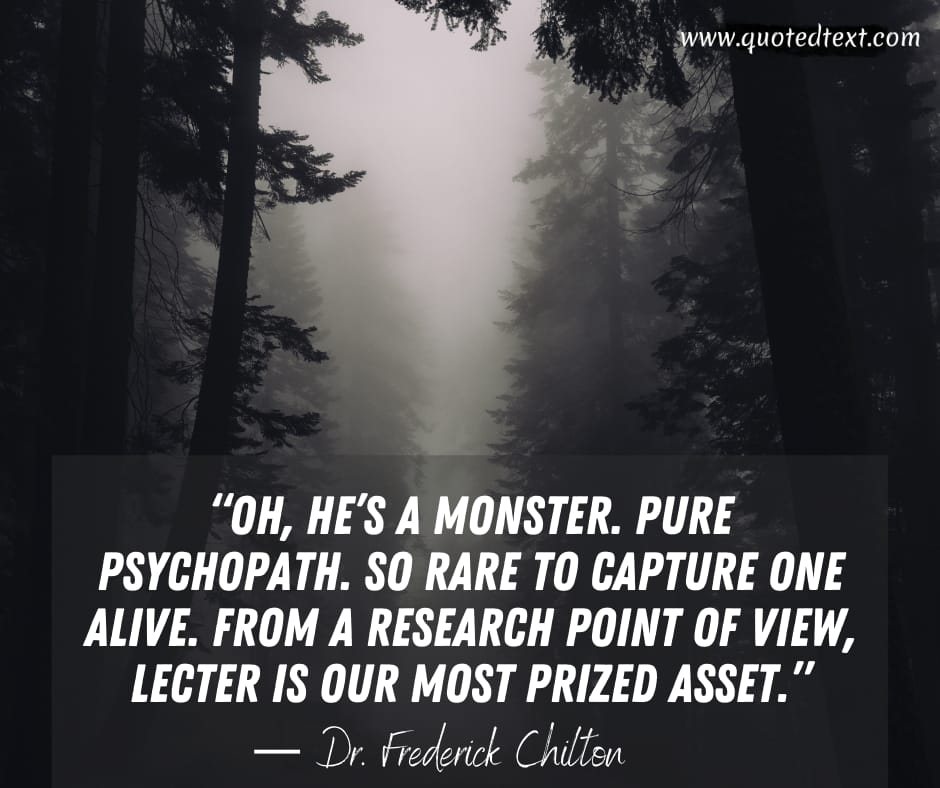 “Oh, he’s a monster. Pure psychopath. So rare to capture one alive. From a research point of view, Lecter is our most prized asset.”
― Dr. Frederick Chilton 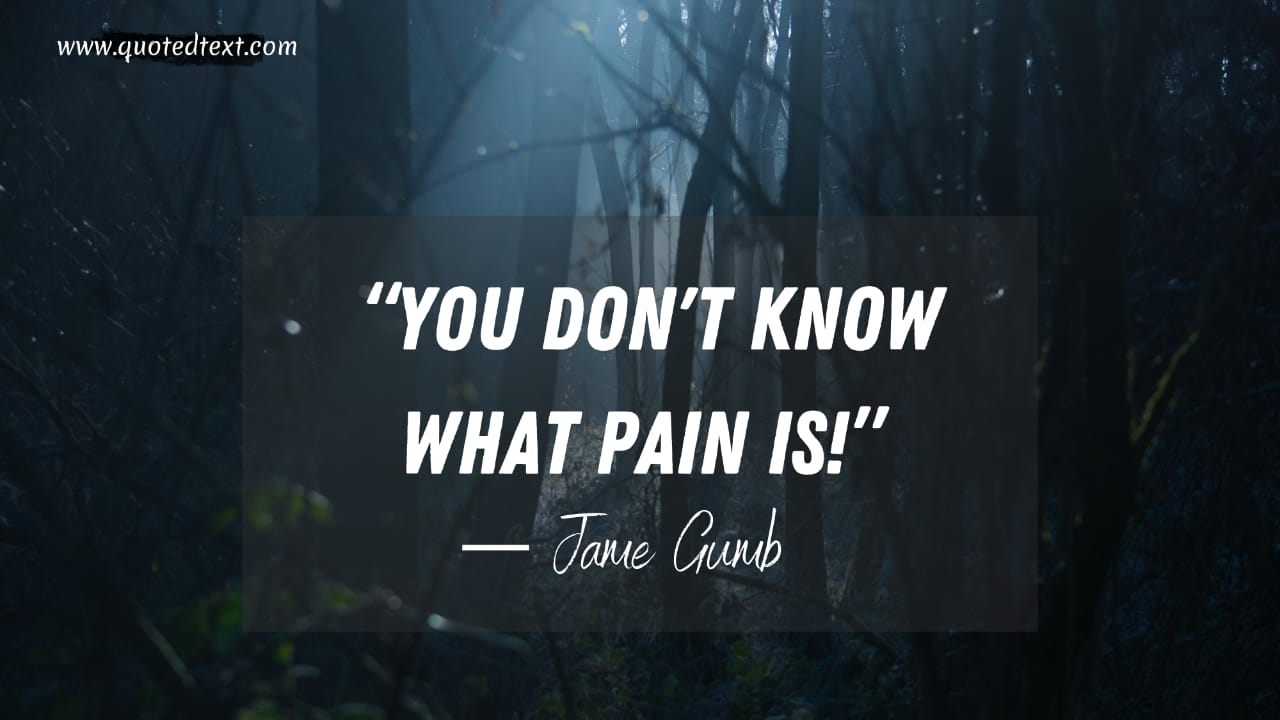 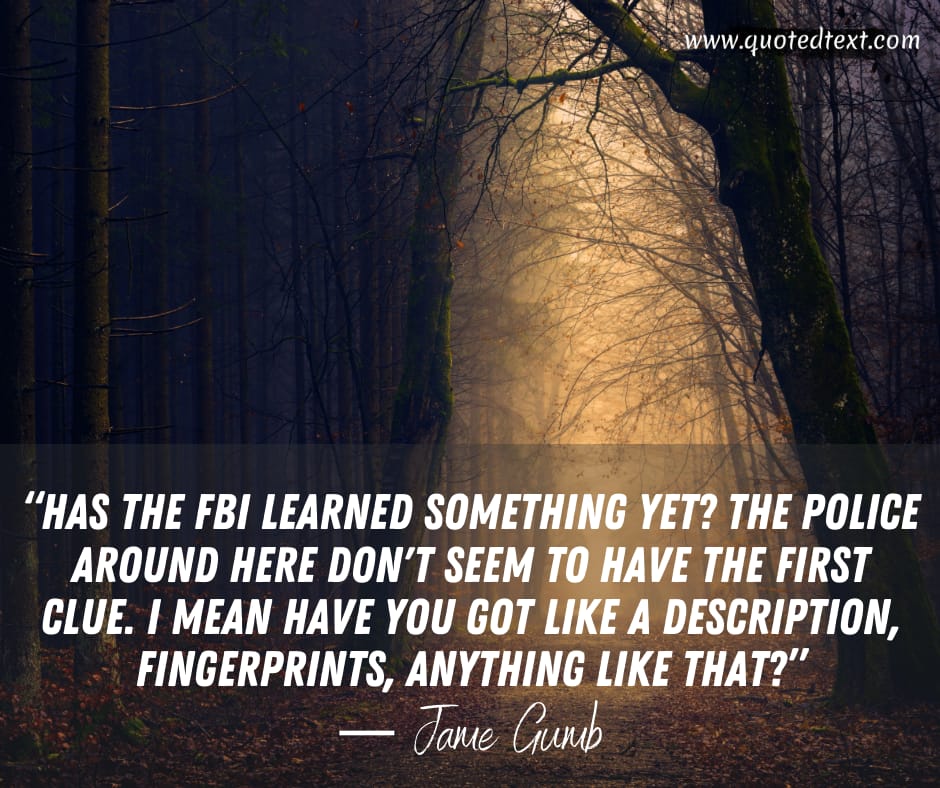 “Has the FBI learned something yet? The police around here don’t seem to have the first clue. I mean have you got like a description, fingerprints, anything like that?”
― Jame Gumb 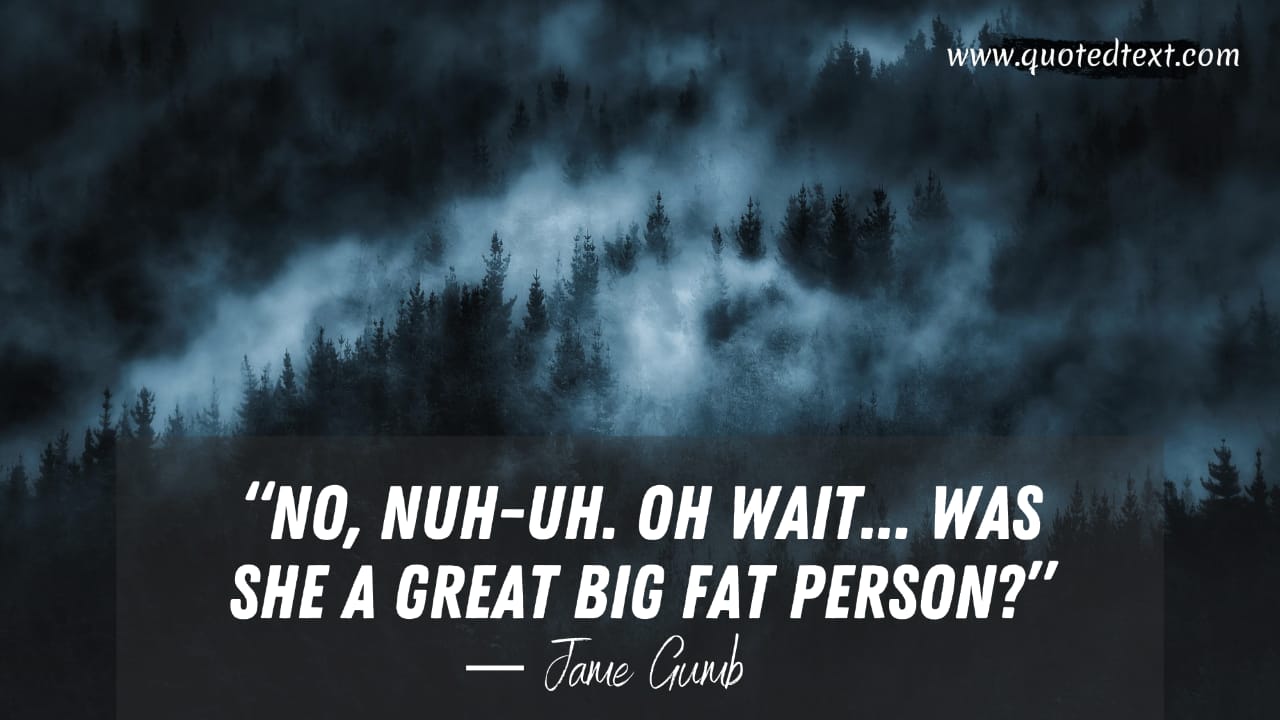 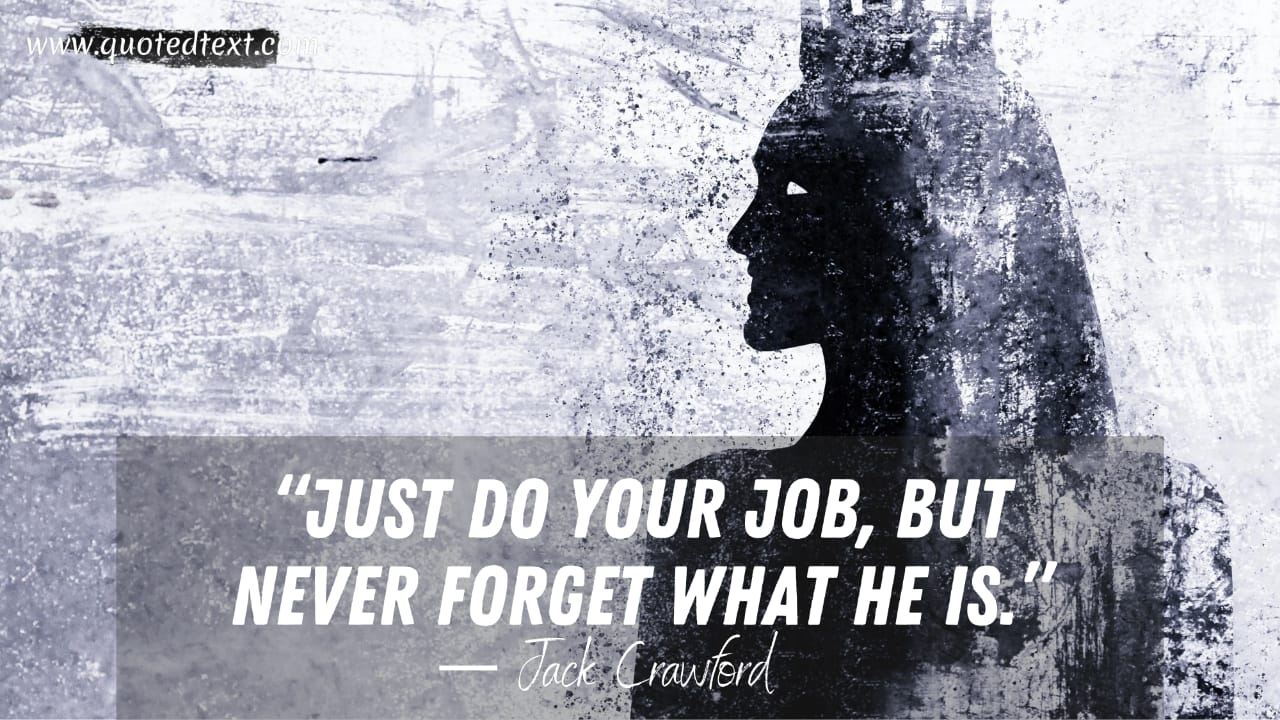 “Just do your job, but never forget what he is.”
― Jack Crawford 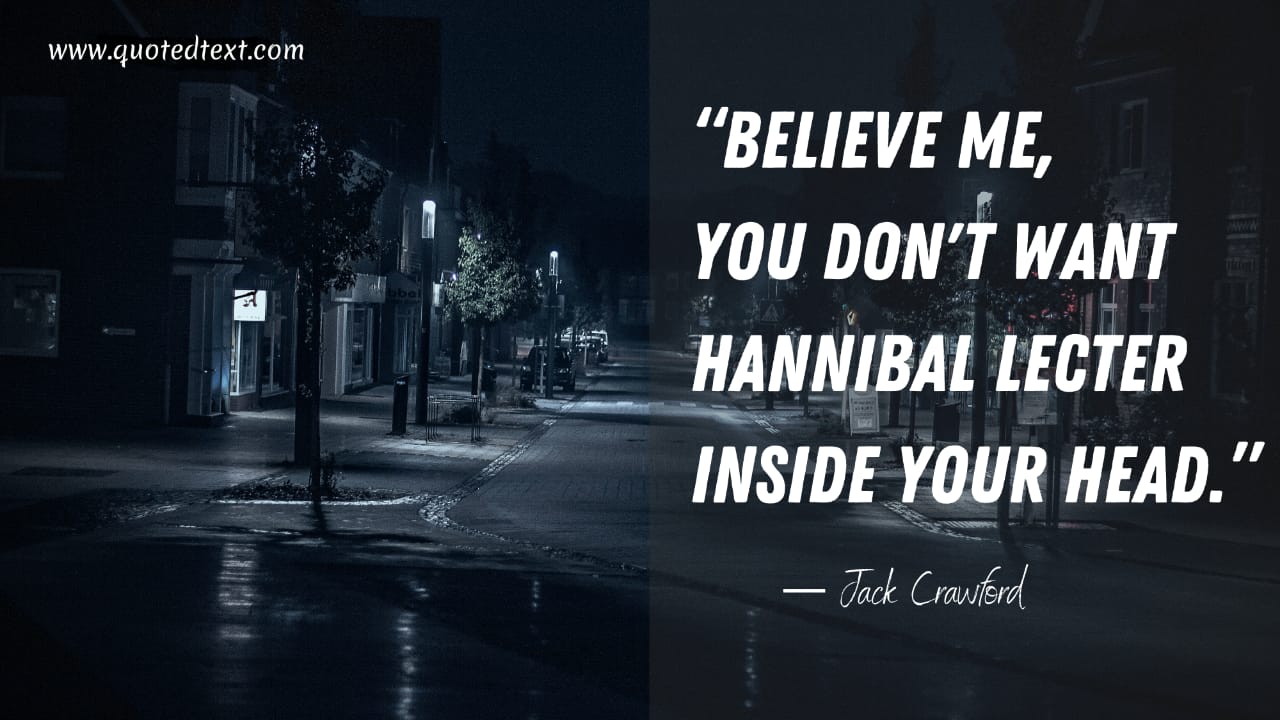 “Believe me, you don’t want Hannibal Lecter inside your head.”
― Jack Crawford 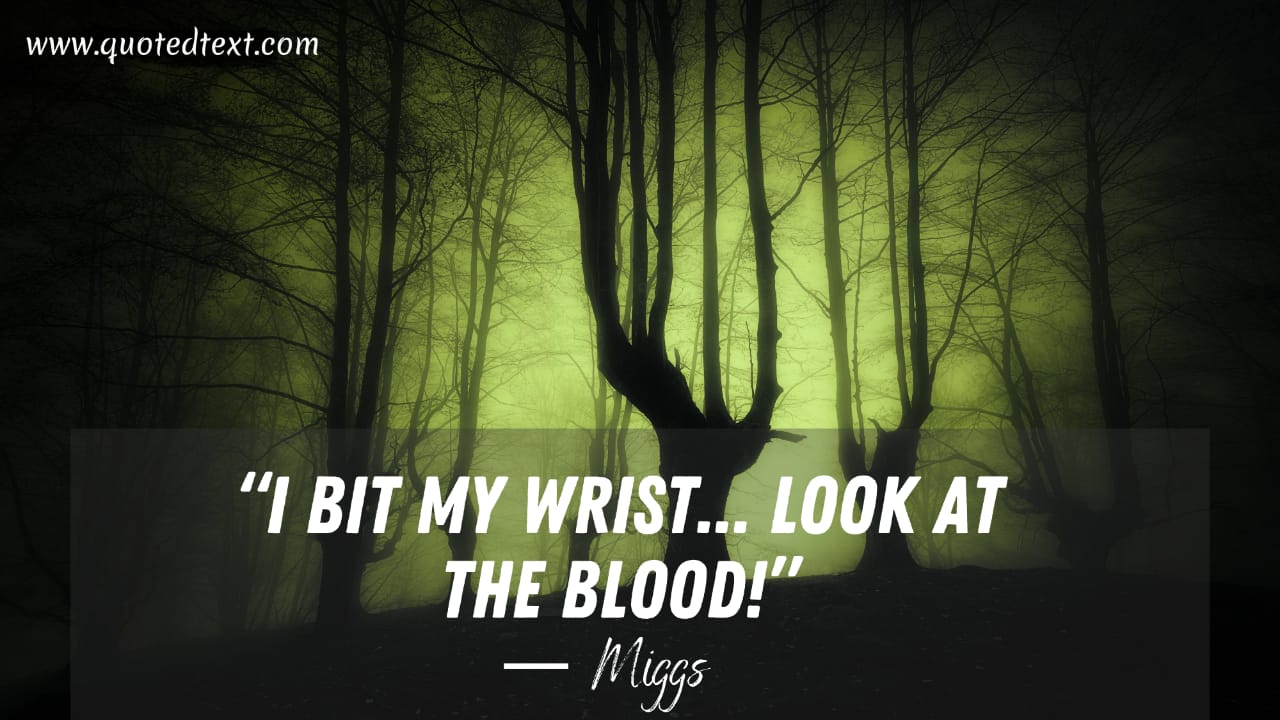 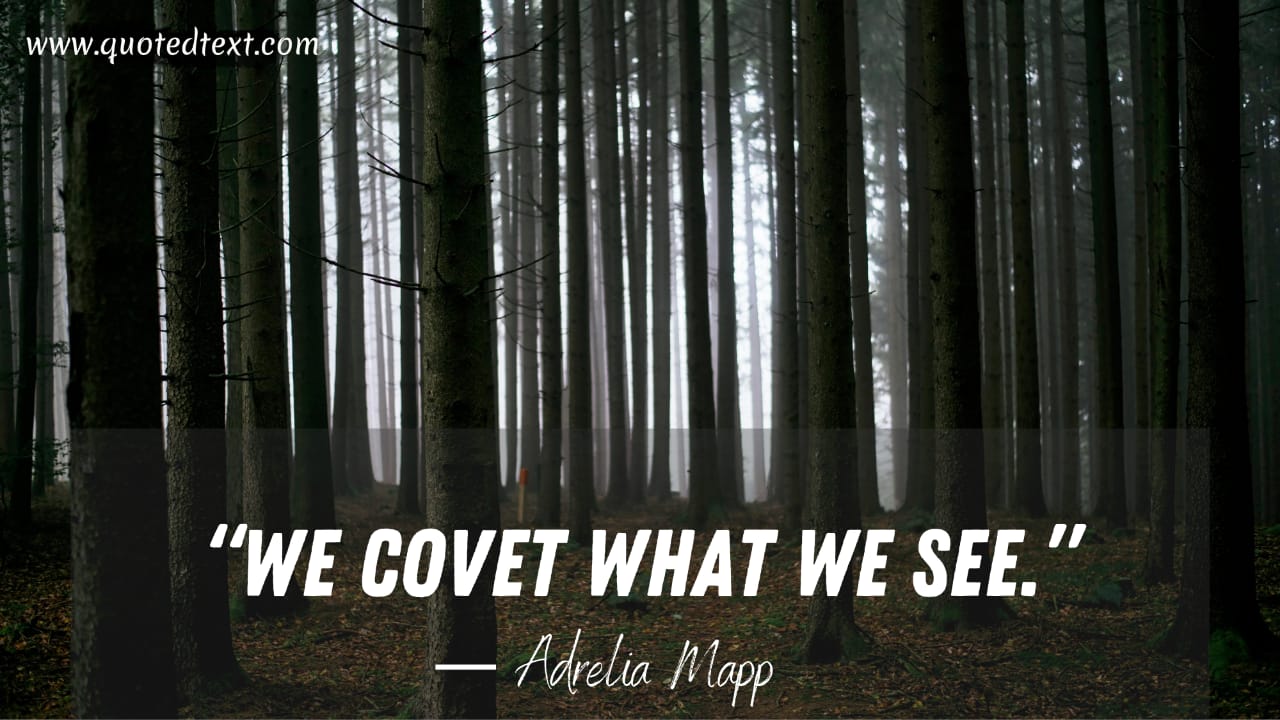 “We covet what we see.”
― Adrelia Mapp 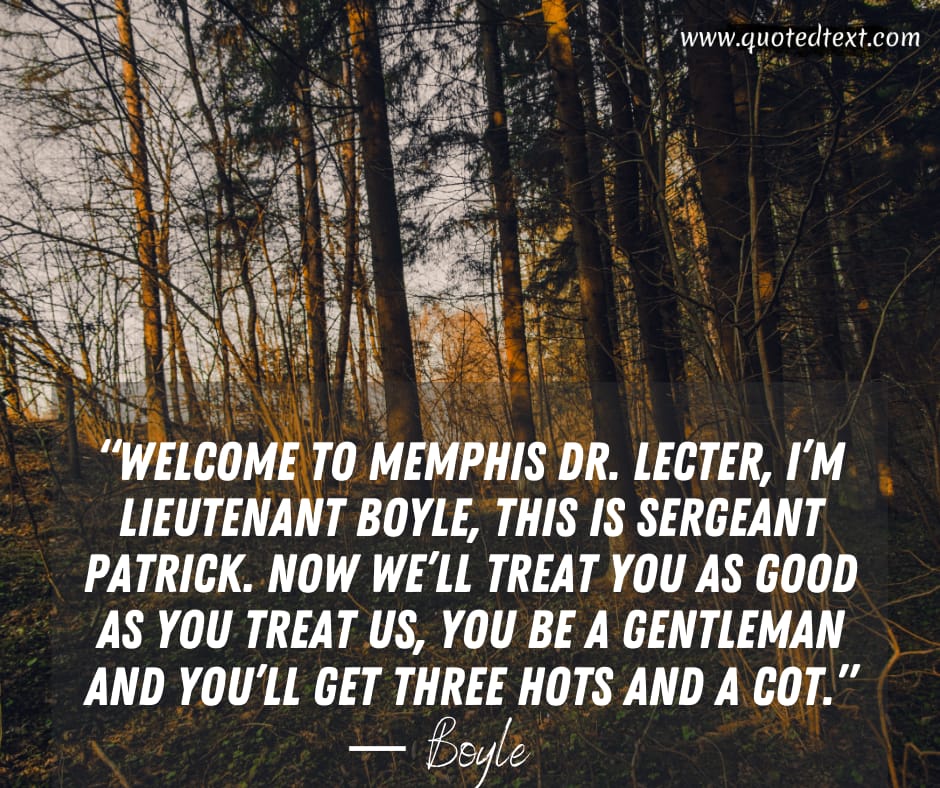 “Welcome to Memphis Dr. Lecter, I’m Lieutenant Boyle, this is Sergeant Patrick. Now we’ll treat you as good as you treat us, you be a gentleman and you’ll get three hots and a cot.”
― Boyle

The Silence of The Lambs comes to an end with Clarice solving the case by finding Jame Gumb, the first victim of Bill. He knew him personally. She stops by his house where she kills him and rescues Catherine, who was alive and nobody knew it. Moreover, she graduates from the FBI, where she receives a call from the escaped Lecter that he won’t follow her if she won’t, warning her not to do so. There’s something about this film that makes it’s viewers want to watch it all over again. The Silence of The Lambs is quite a classic horror that still haunts people in their dreams. However, it never seems old-ish while watching. Viewers still admire how the book The Silence of The Lambs came to life through this film, and they always will.

We hope you liked this article on The Silence of the Lambs quotes. Let us know in the comments about your opinions.

Best 30+ Gone with the Wind Quotes

50+ Best Quotes on Kindness that will Inspire you